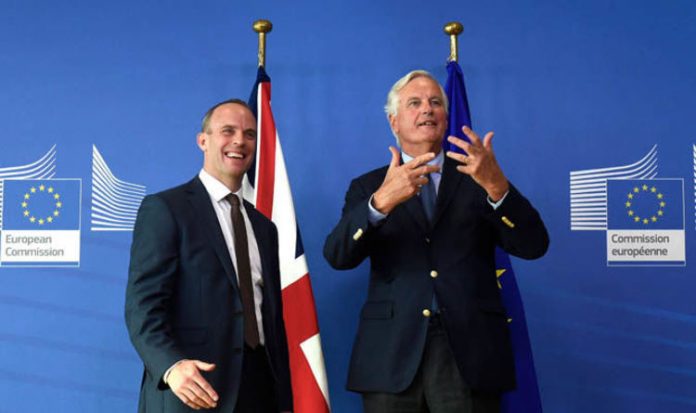 The Brexit Secretary insisted the Government was fully prepared for any outcome from proceedings after meeting the EU’s chief negotiator Michel Barnier.

Mr Raab said: “On the subject of no deal, our actions speak louder than words.”

In a fresh sign of tensions between the pair, Mr Barnier complained of a “blame game” already growing around the possibility of the talks collapsing. But both negotiators yesterday agreed to work “continuously” over the coming weeks in the search for an agreement.

Mr Raab and Mr Barnier spent more than two hours in talks at the European Commission’s headquarters in Brussels yesterday.

Standing side by side at a news conference last night, Mr Raab poured scorn on recent claims about the consequences of a no-deal Brexit, including suggestions the NHS could face a medicine shortage if talks collapse.

He said: “Some of these hair-raising scare stories are very far from the truth.”

Mr Raab said that he “looked forward” to demonstrating the Government’s readiness for a no-deal Brexit when the Government begins publishing a series of 84 technical documents on contingency preparations tomorrow.

The Brexit Secretary added: “There are still some significant issues to overcome – yes on Northern Ireland, I think we both recognise that – but also on the future relationship.

“It’s important to view the whole deal as a package.

“We agreed that we need to step up the intensity of the negotiations as we come into the final phase and we have agreed to meet regularly and resolve at the political level those outstanding issues that remain under technical consideration.”

Mr Barnier responded by dismissing suggestions Brussels was to blame for fears the talks could collapse with no deal. He insisted the bloc had simply been sticking to founding principles.

The French-born EU diplomat said: “To be very frank, I do see a blame game starting against the EU in the case of a no-deal. The EU will not be impressed by a blame game and everyone should understand that.”

Mr Barnier also appeared to cast doubt on hopes a deal could be agreed in time for an EU summit towards the end of October.

He said the EU and UK teams will negotiate “continuously” as Brexit talks enter the final stage.