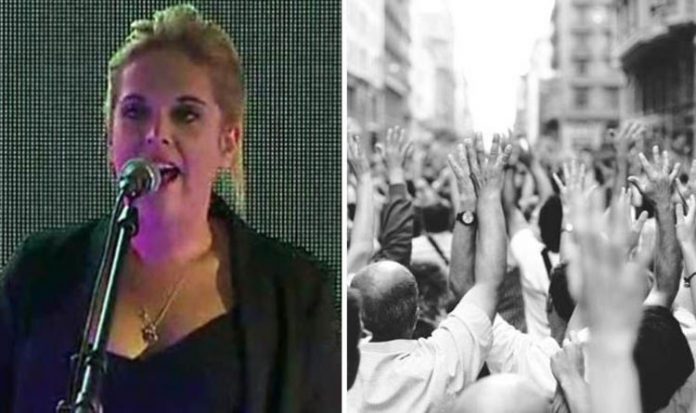 He later insisted he was just been clapping her “powerful speech (which was), saying many things”, not leading a standing ovation in support of her call for a nationwide stoppage by workers.

“A general strike would cause havoc, hitting workers and families hard and harming our economy and people’s livelihoods.

“Labour have learnt nothing from the past and just like last time, would wreck the economy and leave ordinary people worse off.”

Conservative MP Andrea Jenkyns commented: “A nationwide workers’ walkout will bring the country to a standstill. Labour are using the general public as pawns in their political game-playing. Appalling.”

Ms Smith told a meeting of the Socialist Campaign Group at a hard-left festival held on the fringes of her party’s annual conference in Liverpool that Labour should work with unions to mount a general strike if Mrs May refused to call an election.

“We’ve heard calls for a true people’s vote. A general election,” she said.

“Comrades, we must topple this cruel and callous Tory government as soon as we can.

“And if we can’t get a general election, we should organise with our brothers and sisters in the trade unions to bring an end to this Government with a general strike.”

Deputy party leader Tom Watson said: “It’s not particularly helpful, but she is a new MP and she was at a big fringe event – nothing to do with party organisation – and I’m sure she got a little bit carried away.”

Centrist Labour MP Wes Streeting was also dismissive, saying: “The Winter of Discontent (1978-9) didn’t do much good – for the Labour Party, for the labour movement or the people who rely on us.

“Pleasing the crowd is not the same as pleasing the country. Great policies, not cheap clap lines, will secure a Labour government.”

The last general strike to hit the UK was coordinated by the Trades Union Congress in 1926 to safeguard coal miners’ wages and working conditions.

Tory MP Anne-Marie Trevelyan tweeted: “Labour MP calls for general strike. Perhaps we can all think about what we will volunteer for if Corbyn supports this outrageous call to industrial action. In 1926 my great granddad helped the police.”

Educationalist Ms Smith was elected to Parliament in last year’s general election as MP for Crewe and Nantwich.

In June this year she was among several Labour MPs who quit Mr Corbyn’s front bench in protest at being told to abstain in a commons vote to keep Britain in the European Union single market, which Ms Smith then voted against.