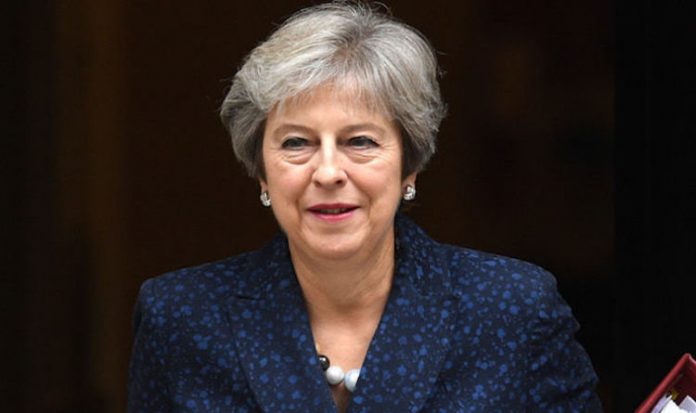 George Freeman, an advisor who sat on Mrs May’s policy board the year she became Prime Minister in 2016, said she should remain in her position to negotiate the terms of the UK leaving the European bloc.

But Mr Freeman said she should then leave with “gratitude” immediately after the UK’s exit, allowing the Tory party to select new blood through a leadership contest.

He said this would allow a fresh approach to implementing the Brexit plan and said a leadership contest next summer would likely culminate at the Tory Party conference.

Mr Freeman said a fresh leader was needed to help steer the country into the future.

He added: “Let me be clear. The PM has done an extraordinary job to make the best of an appalling legacy.

“She deserves the gratitude of a nation which was rudderless in June 2016.

“She deserves the chance to honour her promise and deliver our departure from the European Union on March 29, 2019.

“But the shape of our future relationship must be forged by a new leader. Someone liberated from the poisonous politics of the EU referendum and the shambles that has followed.”

Following Boris Johnson’s mobilistation of the “chuck Chequers” group, which rallies against the Prime Minister’s recent White Paper blueprint, a handful of “hard brexiteers” have been calling for her resignation.

The Brexit Delivery Group, comprised of Remain supporters such as Amber Rudd and Tom Tugendhat, plus Leavers such as Andrew Percy, David TC Davies and Charles Walker, have come together to prevent hard Brexiteers such as Jacob Rees-Mogg from derailing her EU negotiations.

Taking a swipe at the splinter group, Mr Freeman told the Times: “People who should know better are exploiting the PM’s fragile mandate for their own success rather than for the success of the PM and the government in the negotiations. Not only is this irresponsible, it’s unnecessary.

“All parties have already agreed 90 per cent of the withdrawal agreement. The debate raging — inside the European Research Group and the cabinet, which increasingly seem to be indistinguishable — is about the political statement of our long-term relationship.

“But we do not have to decide that now. So why don’t we simply agree to a withdrawal agreement, and an ambitious, non-binding, political statement of an ambiguous new trading agreement with the EU.”

On Monday Simon Hart, one of the leading MPs behind the pro-May Brexit Delivery Group, said the group opposed a second referendum – but said Mrs May should be given the space and credence to come back from Brussels with as good a deal as possible.

Mr Hart said: “As Brexit is a process, not an event, we need to produce an agreement that stands the best chance of getting through parliament.

“However, we are worried that this outcome could be put at risk by those who, perfectly honourably, seek the purity of perfection. In politics perfection does not exist, it is the siren song calling us on to the rocks.”

The Brexit Delivery Group does not endorse Mr Freeman’s calls for the Prime Minister to stand down following the UK’s exit on March 29 of next year.

And last week, Jacob Rees-Mogg insisted his European Research Group was seeking to change the Government’s Brexit policy – but not overthrow the party leader.