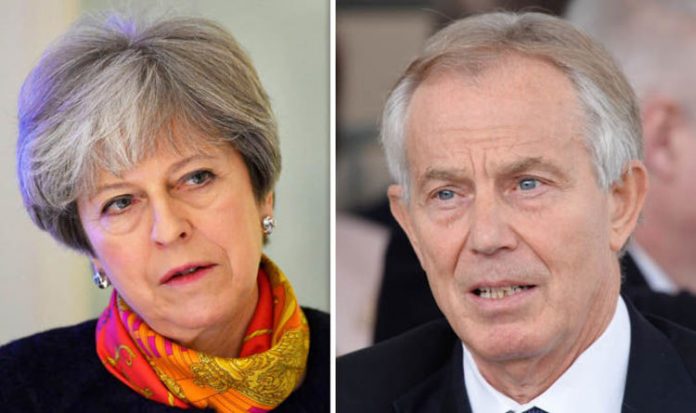 The former prime minister described the compromise deal reached by the Cabinet at the crunch Chequers summit as “mush” and accused Theresa May of drafting the agreement with “exquisite disingenuousness”.

In an article published by his Institute for Global Change, he said: “I fully accept the Prime Minister is putting forward the Government White Paper as a well-intentioned attempt to do Brexit whilst minimising the economic disruption to Britain.

“But this solution – half in half out – won’t work, won’t end the argument and will simply mean a confused outcome in which we continue to abide by Europe’s rules whilst losing our say over them.

“Parliament should reject this solution decisively.”

The former Labour leader criticised Mrs May’s plan for “staying close to Europe whilst trying to pretend the opposite” and branded it “pie in the sky”.

In a damning conclusion, he stated: “It is not making the best of a bad job. It is the worst of both worlds.”

Mr Blair expressed his understanding of business leaders who supported the plan as a means of ending the “agony” of Brexit, but branded their position as “fatally flawed”.

He said: “A genuine ‘soft’ Brexit would obviously be less damaging than a hard Brexit, though it would highlight the ‘what’s the point’ nature of this choice. But this Brexit is just mush.

“The practical upshot of this proposal is to tie us to Europe over large parts of economic life, without a say in its rules.

“This is intrinsically a dismal outcome which reduces British influence for no or negligible gain.”

The former Labour leader stated that Mrs May’s plan, “or possibly for any version of Brexit or indeed for staying”, would likely be rejected by Parliament, and called for a second referendum to be held.

He said: “In any rational world, and I understand that is a big caveat in today’s politics, this would go back to the people for resolution.”

Mr Blair desperately attempted to justify his calls for a second referendum by saying it would not be a “re-run” of the 2016 vote as circumstances have changed.

He said: “Our quantum of knowledge about the issue and particularly about the consequences of leaving the single market and customs union is vastly enlarged.

“And there is fundamental disagreement about what Brexit means between supporters of Brexit.

“The question may be complicated because it really involves three choices: clean break, ‘soft’ or stay. But the complexity is not insuperable.”