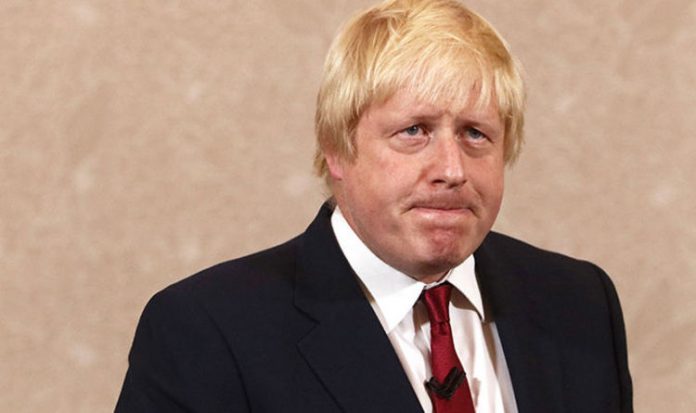 Mr Johnson relaunched support of his own Global Britain slogan, encouraging the UK be “more engaged with the world than ever before” outside of the bitter bloc.

He said “people around the world believe passionately in Britain” so “it’s time we shared their confidence”.

The former foreign secretary insisted in a more global Britain: “The elites of the world pay this country the highest compliment of all in that they want to come here, to shop here, to send their kids to this country’s universities.”

Mr Johnson’s piece in The Telegraph also hinted Remain media are not taken seriously by people elsewhere in the world, and he is concerned about the effect on British confidence.

He said: “I find that they are amazed at the media nonsense and the lack of self-confidence, in the current debate on the EU, about whether we can do things for ourselves.”

Despite a divided Government on matters of Brexit, Mr Johnson is confident Britain still holds its place as a global diplomatic superpower.

He added: “And don’t tell me that the UK is losing diplomatic influence. The reverse is true.

“Just in the past few weeks we saw the UK help to concert the biggest ever expulsion of Russian spies, as 28 countries showed their repulsion at the use of Novichok in Salisbury. All told, 153 Russian spooks were sent packing. In diplomatic terms, the FCO hit it out of the park.

“But if you want to find the people who really believe in Global Britain, don’t just talk to the FCO. Talk to our friends around the world.

“In the Middle East, in Africa, in the Far East.”

Mr Johnson also urged the British people to “believe in what they can do” at such a crucial time.

He continued: “That is why it is time for all of us – at this critical moment in our constitutional development – to believe in ourselves, to believe in the British people and what they can do, and in our democracy.”

The MP for Uxbridge was rallying behind the Global Britain slogan he launched at the start of his time in the Foreign Office two years ago, just weeks after Britain voted to leave the Brussels bloc.

“It wasn’t much more than a slogan.

“It was the way we needed to think of ourselves in the wake of the referendum.

“It was time, I told the crowd – for Global Britain.

“And by Global Britain, I meant a country that was more open, more outward looking, more engaged with the world than ever before.”