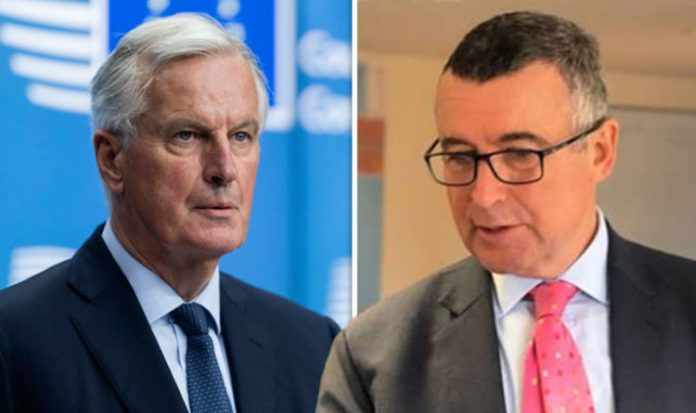 Bernard Jenkin took to Twitter to hit out at the EU, accusing them of purposefully dragging their heels in Brexit talks in order to make the UK’s union exit a failure.

The MP for Harwich and North Essex, who is also chair of the the House of Commons’ Public Administration and Constitutional Affairs Select Committee, said the EU wanted to “close every option”.

And he said this was all a ploy to send a warning to other eurosceptic states in the bloc.

Mr Jenkin said on Twitter: “EU appears utterly determined to close every option for the UK to leave the EU in substance rather than just as a legal technicality; to prove that no country can ever truly leave.

“The UK cannot simply succumb to this determination to hold our nation prisoner.”

The EU’s chief negotiator poured cold water over the UK’s call for a “expanded” equivalence, which rejects the existing models as “not sufficient to deal with a third country whose financial services are as deeply interconnected with the EU’s as those of the UK”.

Mrs May’s commitment to a “common rulebook” also puts the EU in a tricky situation with its promise to protect European citizens from Brexit, according to Mr Barnier.

And the Brexit negotiator believes Mrs May’s plan hands an unfair advantage to Britain because its refusal to align its regulations on services with the EU.

He said: “Are the British proposals in the interests of the EU?

“As you know in any product like your mobile phone between 20 and 40 percent of the value of this good is linked to services.

“So how will we avoid unfair competition in services because the UK would be free to diverge on services?”