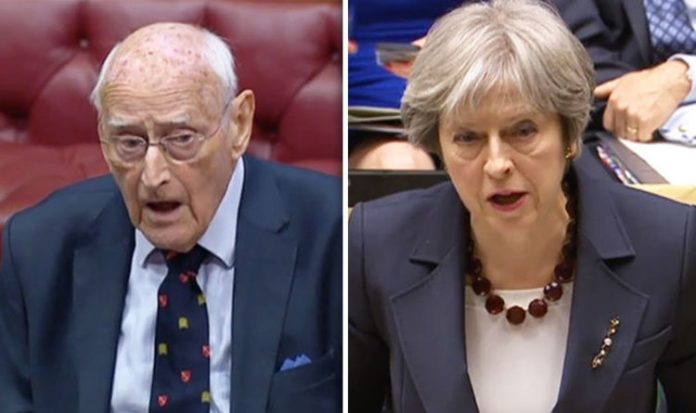 The Brexit campaign was ‘riddled with lies’ and unworthy of respect, Lord Higgins sensationally claimed during a debate on the impact of referendums on parliamentary democracy in the UK in the House of Lords.

The Tory grandee and former Olympian poured scorn on Brexit saying it was not voted through by a majority of the British people.

Around 17.4 million Britons voted to leave the European Union, compared with around 16.1 million who voted to Remain.

Lord Higgins said: “The Prime Minister soon after the result of the referendum said clearly we must respect it. It’s a very interesting word, respect.”

“I have to say, as far as the last referendum is concerned, I think there are lots of reasons for not respecting it.

“It wasn’t a representative vote passed by an overwhelming majority of the population.”

“It was a majority of those voting but quite clearly a lot of people did not vote, because they realised they did not fully understand the issues.“

The peer cast doubt on the integrity of the Leave campaign during his blistering tirade.

He said: “Therefore I think the argument we must respect it also has to bed seen against the background of a campaign which was riddled with lies from begging to end. Not least on the question of the Brexit dividend.”

“In addition, there was a discovery just now, the extent to which the finances of the referendum as far as the Leave campaign was concerned, might of affected the result. “

“So to conclude we must respect the result I think is very doubtful.“

The unelected second chamber has long been a hotbed of anti-Brexit sentiment, frequently amending and delaying key government legislation on the matter.

The EU Withdrawal Bill was the subject of fierce debate as it passed through Parliament.

The legislation, which enables European Union law to transfer into UK law, was highly controversial with both Labour and the Conservatives internally divided over a string of key features of the bill.

The government suffered a string of defeats in the House of Lords, which made 15 amendments to the bill, addressing concerns over the customs union, human rights and giving Parliament a meaningful final vote in the case of a no-deal Brexit.

The bill finally became law on 26th June to raucous cheers in the Commons.