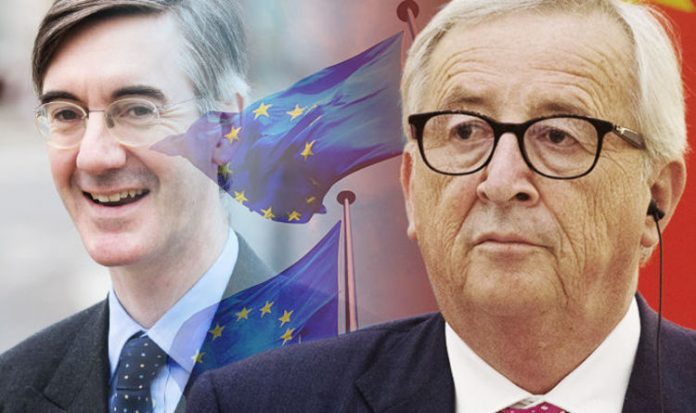 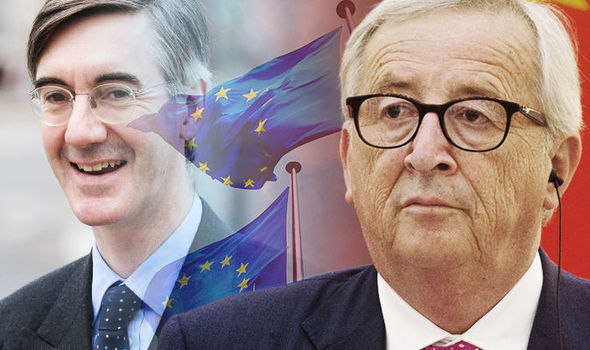 Economists and MPs have said the increasingly likely scenario would mean the UK is free to strike a string of deals with emerging global power- houses.

Today’s special investigation is the first in a series in which the Daily Express, the newspaper that led the crusade to leave the EU, examines the positive impact Brexit will have on key areas that affect millions of Britons including bor- ders and security, agriculture and farming, finance and the NHS.

Our first analysis into trade if there if no deal is reached with the EU has uncovered widespread Brexit optimism.

It comes as even the EU’s own forecasts predict that 90 per cent of future global growth is set to come from outside the bloc.

A series of experts told us they were adamant Britain has nothing to fear and everything to gain from a no deal scenario and doing business on World Trade Organisation terms would boost developing economies currently shackled by EU protectionism while lowering the prices of every day goods for families here.

They were backed last night by MPs who have no concerns if Britain is forced into trading with WTO tariffs.

The Brexiteers are among a growing number who want the so-called Chequers Deal, which paves the way for a soft Brexit, ripped up.

In its own bleak economic assessment the European Commission used International Monetary Fund data to reveal that in 2020, 90 per cent of world GDP growth will come from outside the EU. 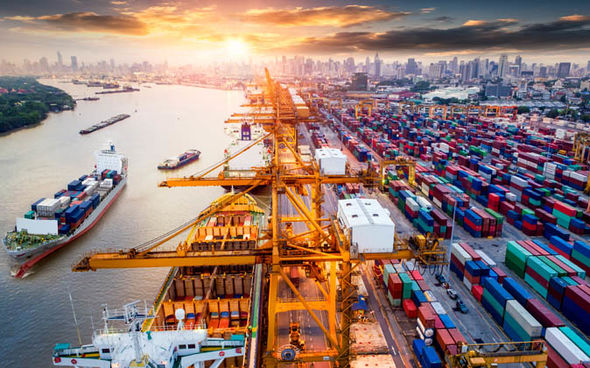 15 of the 22 largest exporters to the EU trade under WTO rules (Image: getty)

The forecast for the EU was £18trillion while world GDP is expected to reach £115trillion.

Respected economic experts say Britain has a once in a lifetime opportunity to seize the chance to lead international trade.

A report published this month by Economists for Free Trade criticised Treasury predictions that formed the centrepiece of pre-referendum Project Fear.

They cited IMF statistics that revealed 15 of the 22 largest exporters to the EU trade under WTO rules and increased their EU exports by135 percent between 1993 and 2015.

The other seven had bilateral trade agreements and increased their exports by 107 per cent.

The 12 original EU members increased their intra-EU trade by 70 per cent while the UK increased its trade with the EU by just 25 per cent.

trade with the EU. Economist Michael Burrage, who wrote the EFT report, said: “Adopting WTO rules will be the very best option in terms of political consequences and that there is no evidence that EU membership had boosted UK economic growth.

“It never occurred to them the UK might sensibly trade under WTO rules for a limited period post- Brexit while it put in place free trade agreements and selectively established unilateral free trade is selected areas in order to become the world leader in free trade that it aspires to be.”

The Government has signalled it wants a time-limited transition period after Brexit, during which time Britain effectively remains part of the single market and the EU customs union. And after that it wants to strike a comprehensive free trade agreement between the EU and the UK.

But time is running out and if no deal is struck by the time we leave in March the UK will revert to trading under WTO rules.

Under this scenario Britain can enter into free trade agreements without the imposition of costly tariffs.

David Paton, professor of industrial economics at Nottingham University Business School, said: “Brexit provides the UK with an historic opportunity but only if we choose to free ourselves from EU protectionism and leave the customs union and single market.

“By doing so, we can expand our links with the fastest growing economies around the world, decrease prices in the shops and re-design our economic and tax policy in a way which works for the UK rather than having to do as we are told by the European Commission.”

Hundreds of British companies are now waking up to the fact the global economic axis is shifting towards emerging markets with an insatiable thirst for British products.

Bolney Wine Estate near Haywards Heath, West Sussex, which was visited this week by International Trade Secretary Liam Fox, is one of tens of thousands lining up international trade agreements.

It recently became the first English wine producer to secure distribution in mainland China, giving it a foothold in the world’s fastest growing wine market.

The Department for Exiting the European Union said: “We firmly believe it is in the interests of both the EU and the UK to strike a deal. That remains the goal on both sides and we are confident that this will be achieved.

“But it is the job of a responsible Government to prepare for all scenarios, including the unlikely event that we reach March 2019 without agreeing a deal.

“That is why individual departments are preparing specific technical notices to help citizens, businesses and consumers to prepare for March 2019 in the unlikely event of a no-deal scenario. These will be published in August and September.”

Nothing to be scared of say Brexiteers

I always thought, and I still believe, that Brexit was positive economically and psychologically for the nation.

Look at Singapore, South Korea and Japan who all do well. 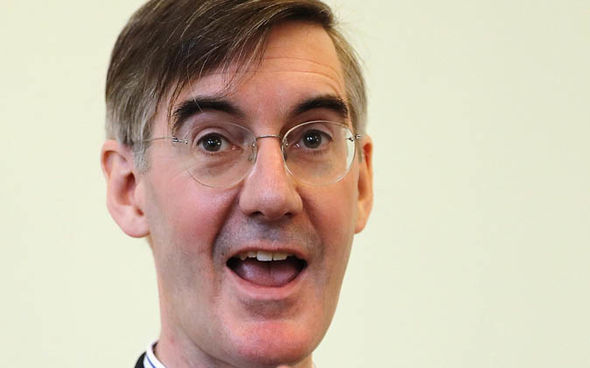 Take Japan, a country with broadly the same usable land mass as the UK and a comparable GDP per capita.

Nobody would for a moment suggest it needs to be run by China.

And so we should have great confidence because we are better making decisions for ourselves than having other people making them for us.

Leaving on WTO terms is something we will be completely capable of doing and will bring economic benefits.

We can immediately cut tariffs on goods from outside the EU, giving us an automatic boost.

This is not something to be afraid of and not the cataclysmic outcome some people think because it will make people’s pounds go further.

We would be free to import goods from outside the EU that are of higher quality, like champagne from California for example, which would annoy the French immeasurably.

We should recognise that countries all over the world run their own affairs and are not part of an equivalent EU.

The EU is a failing economic model. Britain has been one of the leading

countries in the world for half a millennia and we have done this because of our ingenuity and capabilities, not because we have been lead by bureaucrats.

It is the success of people not bureaucrats that gives me very good reason to be confident in the future for two reasons.

The wonderful thing about the vote to leave was those who did had the most confidence in our nation.

For many people it was a vote with their head, a confidence we could do much better for ourselves rather than being in the EU.

It’s a belief in democracy, better economic decision making and a snub to a body that is less subject to scrutiny.

The vote to leave the EU was a choice for the UK to be politically accountable and independent.

Honouring that choice will of itself and for economic reasons be good for the UK. 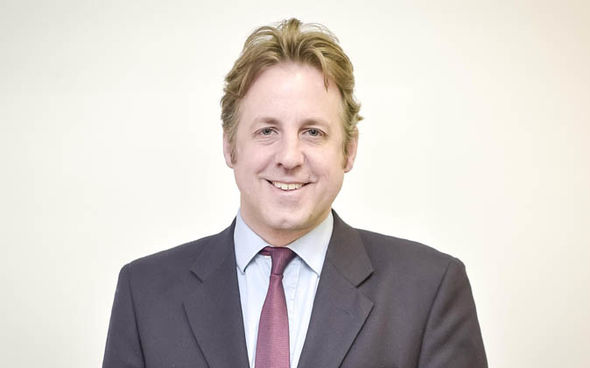 The EU consists of laws and regulations for member states, including for international trade. If we continue to share those conditions we will not really have left the EU, and worse we will have no say.

In trade the EU could sell access to our markets to third countries with no guarantee of reciprocal rights for us in return, and we would have no say on how trade defences were applied.

As things stand – if the Chequers plan is resisted – when we leave we will regain the power to set our laws, regulations and customs, in ways that suit our people and industries, without fear of retribution.

This power in perpetuity is truly valuable, as it ensures we can be nimble in encouraging new business and technologies and can make life easier for the vast swathe of existing businesses in the UK which do not export to the EU.

It’s very much in the EU’s interests to agree a deal.

Tariffs would hit them twice as hard as us.

They sell us £95billion more in goods than we sell them.

We all want to see that continue while we also seek out trading opportunities across the globe.

Yet, of course, there is a real risk that stubborn Brussels bureaucrats will refuse to play ball. 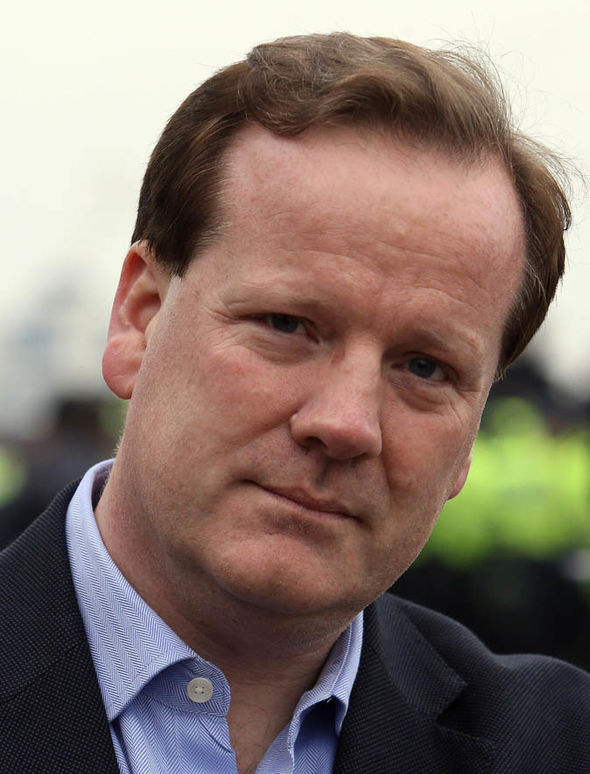 Charlie Elphicke is urging the UK to strike a Brexit deal (Image: PA)

That’s why we must turbocharge preparations for no deal – so we are ready on day one to trade on global terms.

Despite the doom-mongering Britain would be better off outside the EU.

It will enable us to put an end to uncontrolled European immigration.

And with 90 per cent of future global growth coming from outside Europe, we will be free to focus on fast-growth nations.

There would be a £40billion Brexit as we would not need to pay a divorce bill.

Leaving the EU must mean just that.

Too many politicians fear change.

We need them to match the courage shown by voters.

Because this is about the belief in better.

That’s why it’s time for the whole nation to come together and make the most of our potential. 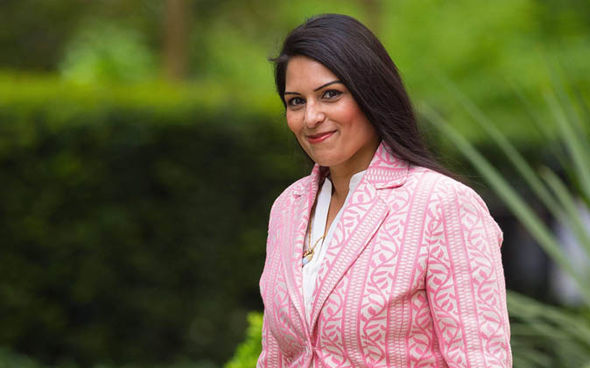 One of the most exciting Brexit opportunities for our great country is that we will once again be able to set our own trade policy.

There has been much discussion about doing deals across the world, yet less focus on why this matters to Britain.

The EU’s own forecasts say that 90 per cent of global growth is set to come from outside the EU.

During the past four decades, the EU has fallen from 30 per cent of global GDP to 15 per cent today.

By contrast, emerging markets and developing economies have gone from 36 per cent of global GDP to 59 per cent.

It’s not hard to see where our long-term focus should be – forging closer trading ties with fast growing economies, we will be better placed to grow as they grow.

In particular ties with the US, India, China, Brazil and other emerging markets who want to buy the types of goods Britain offers.

Take India, for example, which has the highest growing middle class in the world – they want access to great British brands, in clothing and food.

If we make the most of our independence we can reform our economy and forge stronger links across the world rather than putting all our eggs in the EU basket.

At the moment inside the EU our trade policy is made in Brussels.

Once we leave the single market and customs union, we will be able to decide our own trade policy on the terms we choose.

We are unable to set up agreements because of our membership of the EU and everything has to be agreed by a block of 27 countries.

Free trade agreements are good for Britain because wider trading relationships give the consumer choice.

Whether it’s an orange from Brazil or a car from the US, none of it would be possible without trade.

This increases choice and cuts prices for the consumer, as trade increases competition and incentivises efficiency.