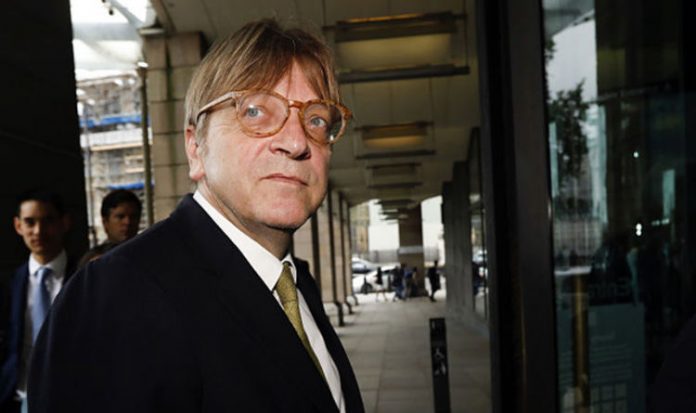 Mr Verhofstadt said of the Chequers statement “the devil is in the detail” and that he MEPs on the Brexit steering group would scrutinise the statement at a meeting on Thursday before he gives a “considered initial response”.

He said on Twitter: “I read the #Chequers statement with great interest.

“But the devil is in the detail. The @Europarl_EN’s Brexit Steering Group awaits the White Paper which it will examine very carefully at its meeting on 12/7 and then give its considered initial response.”

It comes as a QC’s analysis claimed Mrs May’s Chequers plan for the UK to keep close ties with EU, including a “common rulebook” of goods, would leave Britain trapped in a “legal and regulatory tar pit”.

Martin Howe QC produced the 18-page analysis, which has been described by one source as “devastating”.

It states that the Chequers proposals would involve the “permanent continuation in the UK of all EU laws which relate to goods, their composition, their packaging, how they are tested”.

And if the European Union changed its laws, the UK Parliament’s ability to block changes was “probably theoretical rather than practical”.

Mr Howe said: “This would put the EU in a position to fashion its rules relating to goods so as to further the interests of continental producers against UK competitors, when we will have no right to vote on those rules.”

The obligation to follow European Union rules would “gravely impair our ability to conduct an independent trade policy” and was “likely to destroy the prospect” of meaningful deals with the US or Australia.

And the European Court of Justice rulings’ influence would mean the UK would be in a position similar to Moldova, which is willing to accept ECJ judgments as part of its preparations to join the EU, Mr Howe added.

Mr Howe said he thought the EU would reject the proposal, which the would see as UK attempts to cherry-pick the benefits of the single market.

He concluded: “These proposals therefore lead directly to a worst-of-all-worlds ‘black hole’ Brexit where the UK is stuck permanently as a vassal state in the EU’s legal and regulatory tar pit, still has to obey EU laws and ECJ rulings across vast areas, cannot develop an effective international trade policy or adapt our economy to take advantage of the freedom of Brexit, and has lost its vote and treaty veto rights as an EU Member State.”