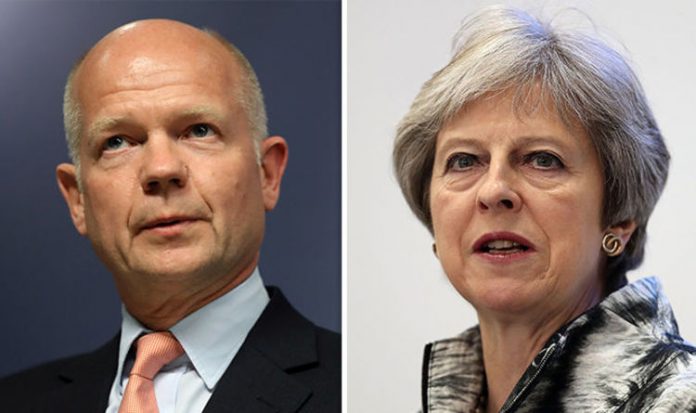 William Hague, former MP and leader of the Tories following their 1997 election defeat, believes a second referendum would look like Parliament admitting defeat on the will of the people and would trounce public trust in democracy.

Writing in the Telegraph, Lord Hague of Richmond said: “More worrying still about a second referendum is the damage it could inflict on democracy in the United Kingdom.

“This would be Parliament saying that even though the country reached a verdict after a long campaign, with a record turnout and a decisive margin, it is not capable of delivering it; that the state cannot honour the wishes of its citizens.

“Faith in our democratic processes would be correspondingly and severely affected.”

He said the division and arguments potentially caused by a second vote “aren’t worth it”.

Mr Hague added: “Added to this disillusionment would be the effects of a bitterly divisive and vituperative campaign.

“Families, communities, political parties and the nations of the UK would be divided seriously and bitterly. It isn’t worth it.

“This country can be a success inside or outside the EU but it can’t prosper or be a happy place to live with ever-deeper polarisation and resentment.”

Mr Hague also took the opportunity to point out some fundamental practical flaws in the idea of another vote on the UK’s ties to the Brussels bloc.

The timescale necessary for another referendum would send the UK well beyond next year’s March deadline on EU membership.

He explained: “The first one is an obvious problem of timescale.

“Referendums in this country are not held overnight, and would not be remotely fair if they were.

“Each one requires a special act of Parliament, which itself takes months to pass.

“A campaign requires further months for each side to prepare, raise funds, state its case and mobilise supporters.

“A referendum held by next June on a deal reached towards the end of this year would still be the fastest such process of legislating for it and holding it that we have ever known.

“Since time would have to be allowed afterwards to implement whichever outcome, the UK would have to ask for a six or nine-month extension to the March 29 date for leaving the EU.”