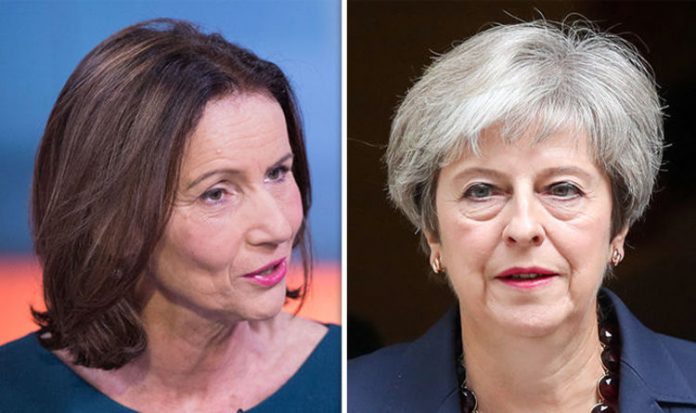 Remainer Carolyn Fairbairn said that with continued fears the UK will tumble out of the bloc without a Brexit divorce deal, firms are being forced into preparing for a no-deal scenario.

She warned that tens of thousands of companies had “no systems in place” to cope with World Trade Organisation (WTO) rules.

Speaking on BBC Radio 5 Live’s Pienaar’s Politics on Sunday, CBI Director General Ms Fairbairn warned there was an “alarming” question about the “future effectiveness of the UK because we are looking to unpredictable at the moment”.

She said: “I think there are now six different ideas for a future Brexit direction which means that if you’re running a business at the moment you can only plan for one outcome and that is a no-deal scenario and that is what we’re seeing.

“There are 150,000 businesses out there that have only ever traded with the European Union.

“There are many businesses who don’t know if their goods would be legally tradable in a no-deal world.

“This is an incredibly serious thing to be considering as a possibility.

“I think because we are so close to it now, it would be a catastrophe and it really should be taken off the table by both sides.”

Ms Fairbairn, head of the organisation that represents 190,000 business, urged the UK to get behind a plan “and the Government’s white paper had a lot of what businesses needed in it”.

She conceded Theresa May’s Chequers proposals are “not perfect” but that it’s a “good framework”, although services firms would like a closer relationship with the European Union than set out the proposals.

On the same radio programme, Under Secretary for Justice and Conservative MP Edward Argar played down the potential impacts exiting the bloc without a deal would have, but also recognised that it would be far from perfect.

He insisted the Government was “working very hard to get a deal” but repeated the Prime Minister’s continued mantra that “no-deal is better than a bad deal”.

Mr Argar said: “Leaving with no deal would not be broad, sunlit uplands and everything perfect but equally I don’t think it would be a catastrophe.”

Last month, Ms Fairbairn warned the EU is at risk of losing 1.2m jobs unless it gives in and starts repaying Britain with some concessions in the Brexit negotiations.

Speaking to Italian daily newspaper Corriere della Sera, she warned EU negotiators they “should not undermine the impact a Brexit no deal would have on European economies”.

The CBI boss argued it was time for Brussels to realise the dooming post-Brexit predictions did not apply only to the UK.

Ms Fairbairn added that it was only fair that the Government should warn UK businesses to prepare for all possible scenarios, highlighting that many small-to-medium-sized businesses in the UK are completely unprepared.

She said: “People always talk about the port of Dover collapsing, but the same thing would happen at Calais in France where almost the entire traffic is towards the UK.

“The same goes for Dutch and German ports.”