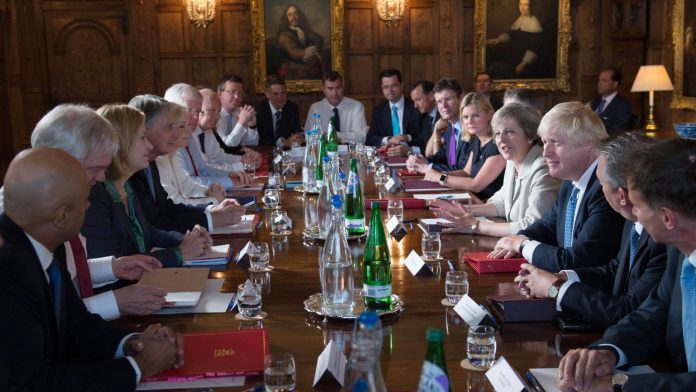 At about 10am the entire Cabinet will begin arriving through the windy country lanes that open up onto the Prime Minister’s Chequers country retreat.

If they look up they might catch some of the thriving population of red kites eyeing the gardens for dead prey – their abundance here partly a product of the European Union’s Bird Directive, exactly the type of rule which the Cabinet may end up deciding to mirror indefinitely.

After handing in their mobile phones at reception, ministers will then have 12 hours to debate and agree the hundred page document mapping out the Government’s preferred option for the UK’s post-Brexit future relationship with the European Union.

Civil Servants will be on hand to redraft the document in real time, but the ministers’ political aides will not be able to communicate with their bosses. There’ll be no back channelling via WhatsApp, or Twitter public diplomacy.

Perhaps this is why last night several Brexiteer cabinet ministers felt the need for what appeared to other ministers like pre-emptive plotting.

They met at the Foreign Office to discuss their unhappiness with many elements of the Paper on the Facilitated Customs Agreement, authored not by David Davis, the Brexit Secretary, but by Oliver Robbins, the civil servant who reports direct to the PM, and has assumed most of the roles of chief negotiator.

Other ministers were phoning journalists as the meeting was happening to point what they say was “certainly an odd look before a major Cabinet meeting”.

Of gravest concern for the Brexiteer cabinet are references to a “common rule book” for goods and agri-goods with the European Union after Brexit.

The paper explains that would require joint authority over such rules by UK courts and the European Court of Justice – an indirect form of jurisdiction which for goods and food, seems to echo the European Economic Area arrangements of the so-called “Norway option” routinely ruled out by the PM.

The paper also contains an acknowledgement that such a system of permanent regulatory alignment with the EU will restrain scope and negotiating power in any potential US free trade deal.

The Trade Secretary Liam Fox went from the Brexiteer meeting straight to Number 10 for a private meeting with the PM to express concerns about trade implications of some of the wording in the paper.

He was given a personal assurance from the PM that the outcome today will meet his acid test of compatibility with independent trade policy. So he is currently on side, but the implication is that Fox expects the current wording to be redrafted at Chequers.

One pro-business senior Tory MP, a signatory of a supportive letter to the PM who has seen the paper, said of the meeting today: “Blood on the carpet is no bad thing for PM. No-ones indispensable. They [Tory Brexiteers] cannot behave like a party within a party and moderates want her to see them off”.

Brexiteers will have to “suck up a lot” in the paper, but if they disagree they should resign, as the PM needs to reassert cabinet responsibility, the former minister argued.

It is far from clear that this type of approach will be welcomed in the European Union. The PM has tried to butter up the leaders of the Netherlands and Germany.

Dexeu ministers are planning to travel European capitals to sell the compromise that seems to split the cherished “four freedoms” of the EU. These are the same ministers who nearly resigned en masse last month.

Some fear that David Davis’ lack of a public threat to resign is in fact more ominous for today’s outcome and so the likelihood of him taking part in next week’s sales job. He wrote to the PM to tell her the plans was unnegotiable with Michel Barnier.

The process has further entrenched the sidelining of his department in the actual negotiation with Europe. There is also a sense, however, that so unlikely is Europe to accept this, that perhaps there is little point in resigning over something that will not happen.

The PM has enough members of her full cabinet to carry the day. The question is the extent to which she wished to accede to the demands of all her ministers.

Chequers marks the point at which it may not be possible to keep all on board.