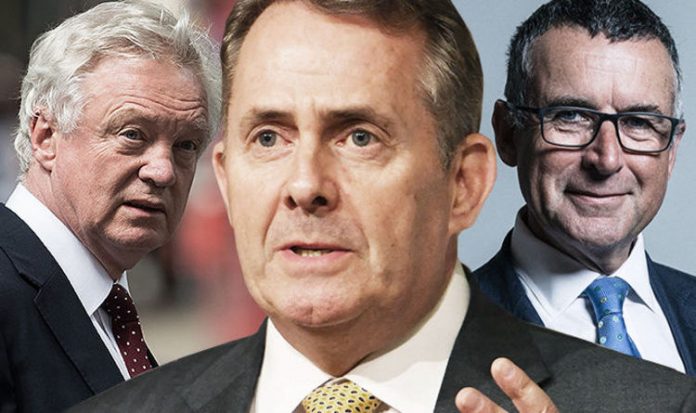 Veteran Conservative MP Sir Bernard Jenkin accused the Government and parts of industry of spreading needless “gloom and alarm”, as he insisted cross-Channel trade would simply continue as now.

Separately, the European Commission was stung into denying senior Tories’ claims it was being so obstructive in Brexit talks it could accidentally force Britain out of the bloc without an agreement on future relations.

Sir Bernard’s comments came amid threats of food and drug shortages and other trade problems that some claim will occur in a no-deal Brexit because commerce would be so disrupted.

Last week the head of the British Sandwich Association was mocked for claiming consumers may have less choice thanks to a lack of key ingredients.

“They would be rioting in the streets at this perverse behaviour.”

World Trade Organisation terms that Britain would trade on if it left without a deal with Brussels were used successfully across the globe, including by other countries with the EU, he said.

The UK legislation to take Britain out of the bloc will also transfer existing EU regulations into British law on Brexit day next March 29, so everything produced in the UK will meet EU standards.

“We can informally assure the EU that that will continue for as long as is necessary and therefore they do not need to put in religious zealotry checking at the borders on everything leaving the UK (which) would be the EU imposing the most draconian customs checks which are seen nowhere else anywhere in this world,” Sir Bernard told BBC Radio 4’s Today.

The MP also rejected “absurd” claims that Britain will run short of medicines in a no-deal Brexit.

“We export more drugs to the EU than they export to us, so you would imagine they would want to maintain their supplies of drugs from us, not gum up the ports with slow, unnecessary and possibly illegal customs checks,” he said.

“Secondly, our drugs regime will automatically be in complete conformity with the EU drugs regime.”

He stressed customs checks were getting ever more streamlined and automated, contrary to “ludicrous and damaging” delay and cost claims being made by parts of industry and society.

“It’s unnecessary and we will look back and wonder what all the fuss was about, a bit like the Millennium Bug,” he added – citing pre-Year 2000 warnings that the Century change would crash computers.

Mr Davis, who before he quit over Theresa May’s Brexit blueprint was leading talks with the EU Commission’s Michel Barnier, said: “This has great scope for being a massive miscalculation on the part of the EU that could end up with no deal by accident.

“It’s certainly not the intention of the EU to have a no-deal Brexit but they are misjudging us at the moment.

“The UK Parliament does not want no deal but it’s certainly not going to be pushed around by the European Parliament.

“I’ve always thought that no deal is better than a bad deal and while there will be border issues and so on… it would give us more freedom.

“This is a negotiation and it will go to the edge, but we must not panic about this.

“They have got lots to lose too, and specific countries and specific sectors have got large amounts to lose. As we get closer to the brink, there will be internal pressure within the EU.”

His comments followed International Trade Secretary Liam Fox putting the chances of a no-deal Brexit at 60:40 because of EU “intransigence” and Foreign Secretary Jeremy Hunt warning inflexible Brussels not to force such an outcome “by accident”.

A spokeswoman for the EU Commission hit back in Brussels, telling journalists: “We are working constructively, day and night, to reach a deal with the UK and I think this is also reflected in the fact that the next negotiation round is scheduled for the 16th and 17th of August.

“It will be at official level but it will be followed very soon at a political level because, as you know, we are working day and night, 24/7, for a deal.”

She stressed Mr Barnier was conducting talks on the basis of a negotiating mandate agreed by the other 27 EU countries.

“But the Trade Secretary (Dr Fox) is right to say there is a risk of the negotiations not succeeding and the Government has to prepare for all eventualities.”

The spokesman added that the EU must now respond to the UK’s detailed proposals, set out in its white paper.

:: Labour grassroots activists will press Jeremy Corbyn at next month’s annual party conference to back reversing Brexit, it emerged yesterday.

A number will call on the party to “stop Tory Brexit and win a radical Labour government”, while others want Labour to vote down any deal Mrs May strikes with Brussels, call an election and then hold another referendum.

Mr Corbyn says Labour will honour the 2016 referendum result, while retaining close links with the EU, although he has not ruled out a second vote.