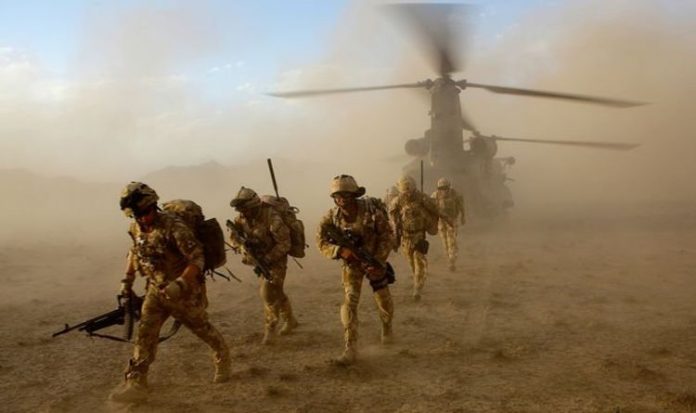 Around 400 soldiers from the 3rd Battalion of the Royal Regiment of Scotland are due to arrive in the war-torn country as part of the planned rotation of troops supporting the Kabul Security Force. But they have not been vaccinated despite widespread fears the virus is out of control in Afghanistan, with little social distancing and a healthcare system decimated by conflict.

News they may not be vaccinated first comes as British forces serve in countries that have had virus outbreaks and high rates of cases.

Former head of the British Army Lord Dannatt and chairman of the Defence Select Committee Tobias Ellwood said the Ministry of Defence has a duty of care to the troops they could deploy to Covid hotspots.

Soldiers must isolate in barracks before they leave the UK and a negative PCR test is required 92 hours prior to deployment.

The father of one of the soldiers said: “It is extremely worrying to my wife and myself to know that my son is going to a country where Covid-19 is completely out of control.

“Our Government is allowing them to go there unprotected, when we have a vaccine which could give them a high degree of protection.

“This reminds me of the start of the conflict in Afghanistan, when it was only after a newspaper campaign highlighted the shortcomings of their kit that they received adequate protective equipment.”

The 10,000-strong US-led Nato mission includes 2,500 US and nearly 1,000 British troops, the UK’s largest operational deployment.Mr Ellwood said: “Our duty of care is to the soldiers. Vaccinating them before deployments should be mandatory.”

He said the precautions taken for Covid should be similar to when units are deployed to places such as Kenya, where troops are inoculated against yellow fever. Lord Dannatt said: “We should vaccinate troops going to Afghanistan against Covid-19.

“This should be seen as part of the MoD’s normal duty of care and not be allowed to be swallowed up in the vaccination priority discussions.”

British troops are stationed in areas which are high-risk Covid zones. They include Nigeria, where a mutant strain was identified, Malawi and Zambia –both on Britain’s banned travel list.

Our Armed Forces are also in Estonia, which has the highest seven-day case average since the start of the pandemic, and in Poland, which has had a seven-day average of 6,000 cases.

The biggest British military base in Africa was plunged into lockdown earlier this month after an outbreak.

Some 320 troops were in “enhanced isolation”, with some forced to live in bivouacs for 10 days. Four soldiers needed hospital treatment in Nairobi.

The surge in infections at the British Army Training Unit Kenya came days after Defence Secretary Ben Wallace and British High Commissioner Jane Mariott visited the camp to reassure locals that it was safe to restart training.

Defence sources insisted: “100 percent of defence individuals in priority groups 1-4 have been offered a vaccine, and this will now be extended to those in additional priority groups in line with national direction.”