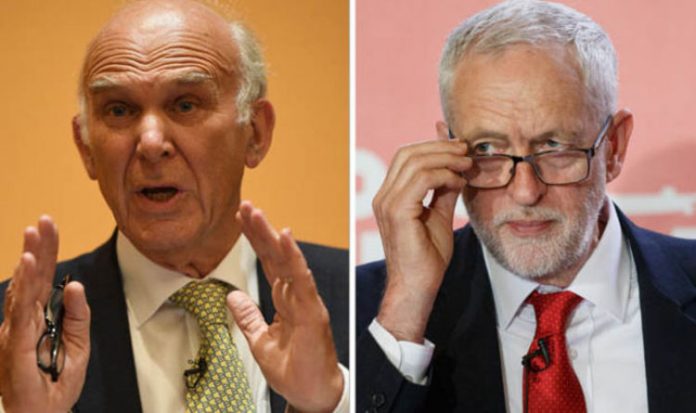 Sir Vince said: “If Jeremy Corbyn will not say ‘I will support a people’s vote and I will fight Brexit’, Labour members should wave him goodbye.”

And in a swipe at Mr Corbyn, Sir Vince said: “He has kept his hands clean and his image polished by hiring hard-left boot boys and girls to do his dirty work.

“They do the bullying and intimidation of colleagues and he claims not to know.

Sir Vince also insisted Prime Minister Theresa May does not believe in Brexit.

Sir Vince said: “She is dutifully delivering a policy she doesn’t really believe in – failing in negotiations, losing public support – and all to appease a dwindling group of angry people in her party who will denounce her as a traitor, whatever she comes up with.”

Sir Vince also launched a personal attack on Boris Johnson, comparing him to US president Donald Trump, saying: “Their cynical disregard for the truth, their treatment of women, and their inflammatory divisive language make Boris and Donald the terrible twins of the rabid right.”

The Lib Dem leader called for an increase in wealth taxes as he branded Amazon, Facebook and Google “world-class tax dodgers”.

Saying that the “tectonic plates of British politics are shifting beneath us” as Labour and the Tories become more hardline, he urged disillusioned MPs to jump ship.

“Much now depends on the courage of mainstream MPs in the Labour and Conservative parties. They are losing control and if they can’t stop the rot, they should leave.”

Drawing on his own experiences of racism, Sir Vince said: “I embarked on a mixed marriage in this country when racism was rife. My wife and children were being denounced as people whose very presence here would lead to rivers foaming with blood.

“And I was thrown out of the parental home.”

Sir Vince, who has announced he wants to hand over the reins of his party to the next generation, insisted the Lib Dems need a major shake-up.

“Our party is still very pale and very male.”