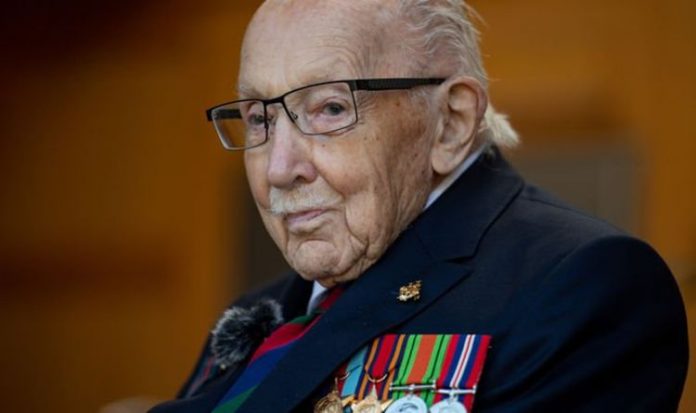 The veteran, who captured the hearts of the nation by walking 100 laps of his garden before his 100th birthday to raise more than £38million for NHS charities, was honoured by the military before the service at midday. After a flypast by a C-47 Dakota from the Battle of Britain Memorial Flight, six soldiers from the Yorkshire Regiment carried Sir Tom’s coffin, draped in a Union flag, into Bedford Crematorium.

As they did so another 14 soldiers formed an honour guard and fired three volleys each ­in unison, while hundreds ­of bellringers at churches across the country rang a single bell 100 times.

Flags nationwide were flown at half mast for the funeral, attended by eight members of Sir Tom’s immediate family, his two daughters Hannah Ingram-Moore and Lucy Teixeira, four grandchildren and his sons-in-law, all wearing masks.

The service opened with the charity single Sir Tom recorded with Michael Ball and the NHS Voices of Care Choir, You’ll Never Walk Alone, which reached number one in the UK singles charts in April last year.

Lucy, 52, paid tribute by saying: “Daddy, you always told us ‘best foot forward’ and true to your word that’s what you did last ­year, raising a fortune for the NHS and walking your way into the nation’s hearts.

“Daddy, I am so proud of you, what you achieved your whole life and especially in the last year.

The veteran captured the hearts of the nation by walking 100 laps of his garden (Image: PA )

“You may be gone but your message and your spirit lives on.” Hannah said the world had become “enthralled” by her father’s spirit of hope, positivity and resilience.

“We are so proud of the way you handled everything that happened. We have been so close as a family before this but we were thrust even closer together as the world became enthralled by your spirit of hope, positivity and resilience.

“They too saw your belief in kindness and the fundamental goodness of the human spirit.”

Sir Tom had lived with Hannah and her husband Colin, and their children Benjie and Georgia, at their home in Bedfordshire for the last 13 years of his life after the death of his wife Pamela.

Hannah continued her eulogy, saying: “You are not a man in the habit of sharing your inner feelings but this time together evoked an honesty between us that felt as magical as you becoming a beacon of light and hope to the world.

“You are the fabric of our life and home, every cupboard that we open, each door that we go through, you are there.”

The veteran was honoured by the military before the service at midday (Image: Getty)

She added: “The loss of you is a dull physical ache for me but the power of the love you left us with allows us to stay strong. Our relationship cannot be broken by death, you will be with me always.” Last night Health Secretary Matt Hancock tweeted: “Captain Sir Tom Moore was an inspiration and we will never forget his efforts throughout the pandemic. He showed the best of Britain. RIP Captain Tom.”

Sir Tom died at Bedford Hospital on February 2 after testing positive for Covid after he was admitted with pneumonia.

His funeral cortege left their home in Marston Moretaine at 11.30am, with treasured items placed on his coffin. They included a ­replica of his service cap from the Second World War, a wreath from the Yorkshire Regiment, his campaign medals including the Burma Star and ­his knighthood medal stitched on to a cushion.

There was also a specially-commissioned officer’s sword engraved with the motto of the Yorkshire Regiment on one side, “Fortune favours the brave” and his own personal motto, “Tomorrow will be a good day”, on the other.

Michael Buble recorded a version of the song Smile, while other music included The White Cliffs of Dover by Dame Vera Lynn, I Vow To Thee My Country by Alfie Boe, ­and My Way by Frank Sinatra.Thousands of people have signed an online book of condolence.

Sir Tom’s official Twitter account urged people to join them in enjoying a cup of tea and slice of Victoria sponge cake to celebrate his life.

It said: “Today we celebrate the life of our hero. Please join us as we raise a cup to him.”

Sir Tom was knighted by the Queen during a ceremony at Windsor Castle last ­summer.

He served with the Duke of Wellington’s Regiment during the Second World War, a regiment later merged with two others to form the Yorkshire Regiment, which made him an honorary colonel in August.

He was originally from Keighley, and his family said once restrictions allow, his ashes will be interred there with his parents and grandparents in the Moore family plot.