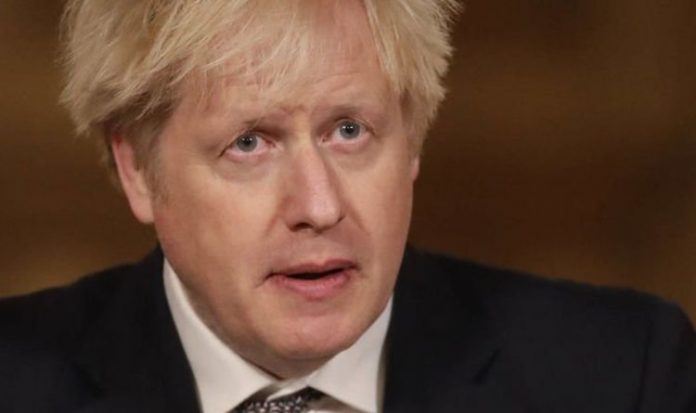 In an appeal to the nation, the Prime Minister urged families to “exercise extreme caution” when getting together under his five-day relaxation of household mixing rules. He warned that the latest surge in coronavirus infections had dramatically increased the risks surrounding the holiday period – while admitting it was too late to tighten the rules. Instead, he called on families to keep gatherings “small, short and local” and to think carefully about avoiding meeting elderly relatives before they have been vaccinated against the killer disease.

“So have yourselves a merry little Christmas – and I’m afraid this year I do mean little,” the Prime Minister said at a Downing Street news conference.

In a sobering warning, Chief Medical Officer Chris Whitty forecast that the looser rules will lead to a higher coronavirus death rate.

“This is not a moment to relax – quit the reverse,” Prof Whitty said.

Prof Whitty said his advice for Christmas was: “Keep it small, keep it short, keep it local and think of the most vulnerable people.”

Government hopes of uniform Christmas rules across the UK were dashed yesterday when the Scottish and Welsh governments announced a major tightening of restrictions.

At his news conference, the Prime Minister promised that the Government’s coronavirus vaccination programme will increasingly curb the pandemic next year.

“And I’m sure that next year Christmas will be as normal for every family in the country,” he said.

He hailed the “colossal collective effort” in the second lockdown across England last month to cut the infection rate.

“But I must be frank with you – we are already seeing worrying rises in some parts of the country,” he said.

Christmas was a time “of immense emotional and spiritual importance but also a moment for us to exercise extreme caution”, the Prime Minister said.

“This Christmas it’s vital that everyone exercises the greatest possible personal responsibility.”

Mr Johnson admitted the infection rate had worsened significantly since his decision to allow a five-day relaxation of household mixing rules was announced last month.

“We have decided that the overall situation is alas worse and more challenging than we had hoped when we first set the rules.

“So while it would not be right to criminalise people who have made plans and simply want to spend time with their loved ones, we are all collectively across the UK, governments at every level, asking you to think hard and in detail about the days ahead and whether you can do more to protect yourself and others.

Mr Johnson said that the Government rule that will allow three households to meet during the five days from December 23 to 27 had set maximum limits “not targets to aim for.”

Minimising the number of people you meet was always the safest option, he said.

And he urged people planning to visit relative over Christmas to reduce the number of contacts with others to as low as possible for five days before meeting up, starting from tomorrow.

“If possible don’t travel from a high prevalence to a low prevalence area and avoid staying away from home overnight if you can,” he said.

“If you’re elderly, the best way to minimise your personal risk is to wait to be vaccinated before spending time indoors with others.

“And if you have an elderly relative, you might want to delay seeing them until they’ve been vaccinated,” he said.

Mr Johnson said it would be “frankly inhuman” to ban Christmas altogether.

Labour last night branded the decision not to review the relaxation of rules “dangerous.”

Angela Rayner, the party’s deputy leader said: “After telling millions of people to make plans for Christmas, and lifting restrictions for Christmas, the Prime Minister is now telling people not to do what he told them to do, but that he won’t review the lifting of the restrictions – dangerous, life-threatening incompetence.”

A Government document published on the gov.uk website last night detailed the rules and guidance for Christmas including setting out the differing restriction in areas under the three coronavirus alert tiers.

It made clear the Christmas bubble rules will not apply on New Year’s Eve and urged people not to gather in large groups to see in 2021.

With the UK-wide approach to the festive season fracturing, Scottish First Minister Nicola Sturgeon advised Scots to stay in their own homes over Christmas.

“The safest way to spend Christmas this year for you and for those you love is to stay within your own household and your own home,” she said.

Ms Sturgeon recommended those people forming a Christmas bubble should only meet up with people on one day, if possible, and not stay overnight “unless it is unavoidable”.

The Welsh government announced that Christmas bubbles will be reduced to two households in the principality by law and a tougher lockdown from December 28.

Welsh First Minister Mark Drakeford said: “Here in Wales, the position is that only two households should come together to form an exclusive Christmas bubble during the five-day period.

“The fewer people we mix with in our homes, the less chance we have of catching or spreading the virus.”

In Northern Ireland, First Minister Arlene Foster said the public must take “all and every precaution” at Christmas and proposals for further restrictions will be brought forward on Thursday.

“The safest way to spend this Christmas is with your own household or your existing support bubble in your own home – and we strongly recommend that this is what you do if at all possible.”

• Minimise the number of people you meet. The limits stating that members of the three households can meet on five days are maximums not targets.

• If visiting others over Christmas, reduce the number of people you are in contact with to the lowest possible in the five days beforehand from tomorrow.

• Do not travel from an area with a high coronavirus infection to one with a low infection rate if possible.

• Avoid staying away from home overnight if you can.

• Elderly people should minimise their personal risk by waiting to be vaccinated against coronavirus before spending time indoors with others.

• If you have an elderly relative, consider delaying seeing them until they have been vaccinated.

• Think carefully about avoiding crowds in the Boxing Day Sales.

• No one should gather in large groups to see in the New Year.

• During the Christmas period December 23-27, people can attend a place of worship with members of their Christmas bubble. They must keep two metres apart from other members of the congregation.

• People can attend indoor carol services but must keep two-metres away from others and not join in singing. The guidance allows carol singing outdoors but the rule of six and two-metre rule applies to groups going door to door.