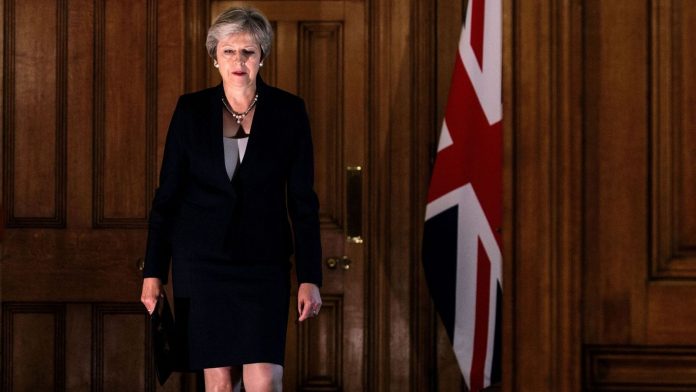 The cabinet meeting on Monday is yet another crunch point for the Prime Minister and her Chequers compromise deal reached in July.

It risks missing the point, however, in terms of what is actually holding up negotiations with the European Union.

Whatever the temptation to force the PM to abandon Chequers, the core of which is to keep free and frictionless trade in goods and agriculture by maintaining common rules with the European Union, it is the Irish border problem that is the actual hold up over the next month.

Sceptical members of the cabinet may well feel emboldened to persuade the PM to “chuck Chequers” by the fact that the EU27 so clearly and publicly told her that its key economic elements “will not work”.

But the fight she needs to have right now after last week’s Salzburg summit misjudgements is about the Irish border backstop arrangement.

She had attempted to say to Irish leader Leo Varadkar that detailed UK plans on Ireland would not be ready until November. This is what prompted the EU27 over lunch last Thursday, led by President Macron of France to drop a plan to commit to a special deal-making Brexit summit in mid-November.

That summit will now depend on Michel Barnier reporting back in three weeks’ time to the EU27 at the October summit that substantial progress has been made on the commitments in relation to Ireland.

This was the really significant part of the PM’s Number 10 podium statement last Friday. She gave an indication that the UK government would accept extra regulatory checks between Great Britain and Northern Ireland, as long as they were approved by the Northern Ireland assembly.

This plan was verbally communicated to Mr Varadkar in outline at last week’s Salzburg breakfast meeting, but with nothing on paper.

He in turn asked for detailed written plans. It appears as a result of last week’s events they will now be forthcoming.

Both sides are inching closer together on this thorny and controversial issue. The PM said there could be no customs or VAT checks, but there are existing small-scale checks in agriculture to maintain the integrity of all Ireland markets, for example cattle.

The EU negotiators asked for and received data on how much “East-West” trade actually flows through Larne and Belfast.

Team Barnier negotiating for EU27 and Ireland has evolved the backstop plans into not-published detailed proposals, and were disappointed that Number 10 rejected this in a pre-Salzburg briefing. Again this refers to the East-West – ie intra UK trade NOT North-South trade between the UK and the Republic of Ireland.

On Customs and VAT – the EU is willing to look at barcodes and enforcement away from the border. Though UK negotiators say why not use the same technology North-South or even at Dover-Calais?

The maintenance of product standards, the EU says, can also be done “in the market” by surveillance authorities, not by checks at the regulatory border. But for food and agriculture standards, there “must be checks” says one EU source appearing to mean what under EU law is referred to as a “Border Inspection Post” at entry points into Northern Ireland for food and agriculture from Great Britain. These would be on a much greater scale than exists currently.

The PM’s red line appears to be that Northern Ireland must not remain aligned to the EU’s customs territory, and so therefore will be a full part of new trade deals struck by the UK government. The EU say this was already agreed last December in the Joint Report, and the implication of the EU’s approach to the backstop is if activated, that future UK trade deals with third countries would effectively be Great Britain only.

Progress, a UK text, and agreement is required by the October summit to unlock a wider agreement in November. In many ways the future arrangements and Chequers plan can be fudged at that point.

But to get there the initial challenge is not necessarily the cabinet. It is the DUP whose 12 MPs have kept the PM in office, and where its leader Arlene Foster has vowed in the currently suspended Northern Ireland Assembly to “veto any attempt to undermine the constitutional integrity of the UK”.

The wrinkle for the PM is that she, understandably wanted to try to sort out Northern Ireland at the same time as negotiating the future relationship. The closer the latter, the easier the former in terms of potential checks.

But the reestablishment of a form of sequencing in the negotiations, a reflection of some fall in mutual trust complicates matters. The solution might be some sort of statement that the backstop will never be used.

So while profound internal tensions over the Chequers plan that this cabinet signed off just two months ago exist, the more pressing issue for Number 10 is Northern Ireland.

And it is perhaps no coincidence that a number of high-profile cabinet ministers harbouring leadership ambitions, have quietly made visits to DUP events in Belfast in recent months.