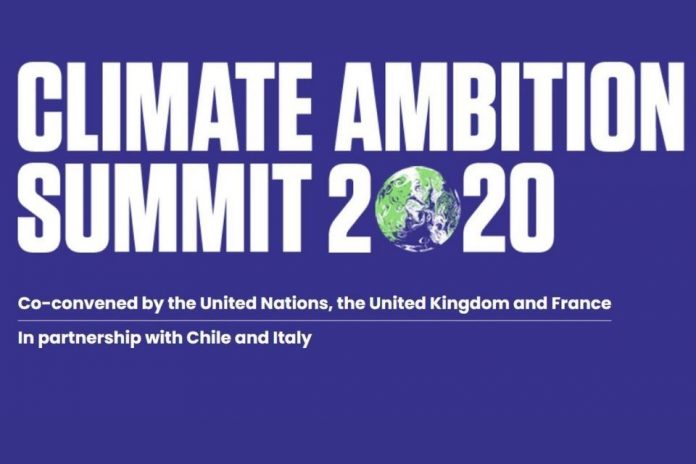 Yesterday’s Climate Ambition Summit, marking the 5th anniversary of the Paris Agreement, marked a major milestone on the road to the UN Climate Conference (COP26) in Glasgow next November, which will be hosted by the U.K. in partnership with Italy. Co-convened by the United Nations, the UK and France, in partnership with Italy and Chile, the summit brought together 75 leaders from around the world to galvanise international action towards a resilient, net zero emissions future.

As a result of announcements made during and before the summit, together with those expected early next year, countries representing around 65% of global CO2 emissions, and around 70% of the world’s economy, will have will have committed to net zero emissions or carbon neutrality by early next year.

The UK is one of those countries. Opening the summit, UK Prime Minister Boris Johnson announced the UK’s commitment to ending direct taxpayer support for fossil fuel projects overseas, as the government works to support the sector’s transition to low-carbon energy.

This is a major step that will see the UK end export finance, development aid, and trade promotion for new crude oil, natural gas or thermal coal projects, with very limited exceptions.

The UK also pledged £11.6bn in International Climate Finance over the next five years and announced a new £10m commitment to a multilateral Green Recovery Initiative, which will support developing countries to build back better by integrating their climate commitments into economic efforts to recover from the pandemic.

Today we have seen what can be achieved if nations pull together and demonstrate real leadership and ambition in the fight to save our planet. The UK has led the way with a commitment to cut emissions by at least 68 percent by 2030 and to end support for the fossil fuel sector overseas as soon as possible, and it’s fantastic to see new pledges from around the world that put us on the path to success ahead of COP26 in Glasgow.

France and Sweden have also set out plans to end international financial support for fossil fuels.

The EU is a leader in this global fight, with our new target of reducing greenhouse gas emissions by at least 55% by 2030 – which is a fundamental milestone on the way to carbon neutrality. The EU and France will continue to promote ambitious levels of climate finance. We look forward to working with the United Nations, the UK COP Presidency and all parties to the Paris Agreement to keep raising ambition, and deliver on it through concrete action, in the year ahead.

Denmark announced it will end oil and gas exploration, while India announced a new target of 450GW installed capacity of renewable energy by 2030. China also committed to increasing its share of non-fossil fuel in primary energy consumption to around 25% by 2030.

Egypt’s participation was led by Minster of Environment Dr. Yasmine Fouad, who submitted a video as Chair of the 14th Convention on Biodiversity (CBD) Conference of the Parties (COP14).

A major new global campaign – the Race to Resilience – was also launched at the summit. Involving mayors, community leaders, businesses and insurance companies, among others, the campaign aims to safeguard 4 billion people vulnerable to climate risks by 2030.

Examples of the campaign’s actions and initiatives included Apple’s pledge to carbon neutrality for its supply chain and products by 2030, and its announcement that 95 of its suppliers have also committed to moving to 100% renewable energy.

In addition, the International Airlines Group, a British Spanish airline holding company, has committed to achieving net zero emissions by 2050, the first airline group worldwide to do so. The Oneworld Alliance of 13 airlines, representing 20% of global aviation, also announced a US$400m investment in sustainable aviation fuels to achieve net zero carbon emissions by 2050.

The recovery from COVID-19 presents an opportunity to set our economies and societies on a green path in line with the 2030 Agenda for Sustainable Development. As we look ahead, the central objective of the United Nations for 2021 is to build a truly Global Coalition for Carbon Neutrality.