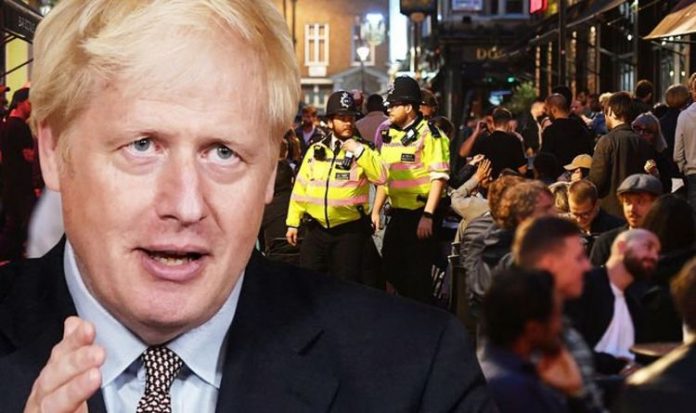 Under the measure people are not allowed to gather in groups of more than six for any social occasion. Another 62 Tory MPs abstained on the vote, though it still passed.

As Labour also abstained whilst five DUP MPs voted against the total number of MPs who voted with the Government was less than half.

Mr Johnson is expected to face a tougher challenge next week when Parliament votes on the 10pm curfew introduced for pubs and restaurants.

Critics claim the measure is economically damaging and may even be spreading the infection as revellers gather outside pubs and bars after closing time.

Nasrat Ghani, one of the Tory rebels on the rule of six vote, claimed the measure was based on “the simplicity of the message not actual science”.

She added: “It didn’t convince me to vote for it.

“We need a proportionate response and justifications for limiting families’ freedoms.”

Another rebel was Steve Baker, who has argued coronavirus restrictions place an unacceptable burden on individual freedom.

He commented: “It’s not clear now that the benefit outweighs the costs of lockdown.

The number of new COVID-19 cases recorded in Scotland per day is now averaging around 730, versus just 285 just two weeks ago.

As the number of UK cases surged additional lockdown measures, some national and others local, have been imposed on Britain.

Earlier this month Mr Johnson tweeted: “We will get through this – but only if we work together.

“Continue to follow the rules, download the #NHSCOVID19app – and together we will fight back against this virus, protect our NHS and save many more lives.”

In total Britain has recorded more coronavirus deaths and cases than any other European country.

It has also seen the biggest drop in GDP on any member of the G7 club of advanced industrialised nations.

At the virtual Tory conference Health Secretary Matt Hancock reiterated the Government’s plan to build a new generation of hospitals.

He tweeted: “We’re working to defeat this unprecedented #coronavirus, whilst protecting schools & the economy.

“Despite this pandemic, this #OneNation government will deliver on the mandate we were elected on, including building 40 new hospitals & recruiting 50,000 more nurses.”