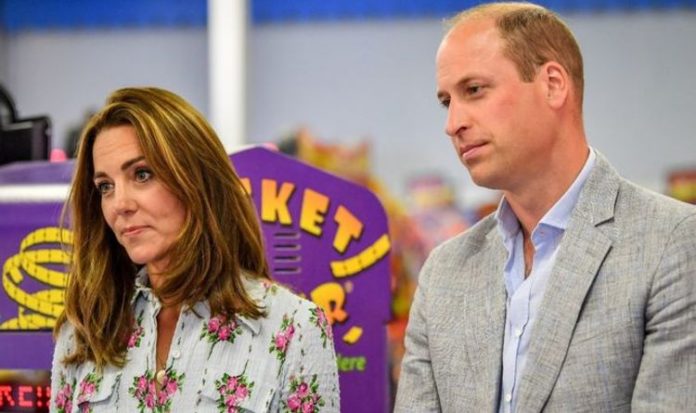 Kate, Duchess of Cambridge, and Prince William burst into laughter after they were hilariously scolded by a care home resident. The royal couple were visiting Shire Hall care home in Wales, the same residency they had hosted a virtual round of bingo for back in May. However, one brutally honest elderly woman couldn’t resist letting her thoughts on their bingo skills be known.

As they finally met in person, William asked 87-year-old Joan Drew-Smith if she remembered him and his wife from the video call.

He said: “You might not recognise the face masks, but we did the bingo with you.

READ MORE: Kate ‘did little to bridge divide’ between William and Harry

The cheeky pensioner’s strong response set off everyone around into peels of laughter, including the royals.

READ  Hands off our taxes! Irish MEP lashes out at Juncker - ‘This MUST be blocked’ | Politics | News - UK

The Duke joked: “Excellent. Was it that bad?

“Was it the worst job you’ve ever seen?”

In the original bingo video, Kate and William can be seen cheering for the resident when her win is announced.

The virtual engagement had been part of a week spent calling care workers around the UK to thank them for the work they had been doing during the coronavirus pandemic.

The royal couple spoke to essential staff about the challenges of providing PPE and supporting one another.

READ  Government sets out comprehensive support for renters this winter

They also highlighted the mental health implications of looking after residents in care homes, which is an area both Kate and William are very passionate about.

Now that members of the Royal Family have begun to make in-person visits again, the Cambridges took the opportunity to go to Shire Hall.

Earlier in the day they also visited the nearby seaside resort of Barry Island.