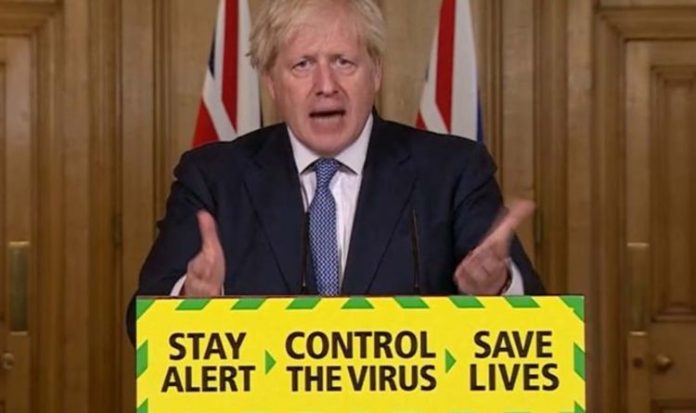 The review is set to be published within the next few days.

It came after it emerged daily figures featured those who had died following a positive test result – whatever their cause of death.

Ministers are looking to only report deaths within 28 days of a positive test results, to bring the methodology in line with that used in Scotland and Northern Ireland.

This figure is expected to be considerably lower than the current measurement, which increased by 21 yesterday.

Daily briefings at the start of the pandemic (Image: PA)

However, PHE is arguing this figure would exclude thousands of cases including people with “long COVID” symptoms.

Now, government statisticians are calling for a third option to be published known as the “60 day plus” measure.

This system uses a 60-day cut off but allows for any additions for those who may have died later following a positive test result.

This figure is expected to bring the overall roll down by only a few percent, the Times reported.

READ MORE: Coronavirus cases MAPPED: Only EIGHT areas rising – is your town one?

It is believed, both the 28 and 60-day results will be published as well as the existing method.

The 28 day figure allows final totals to be reported quicker while the other option is more comprehensive.

A source said: “It’s not a clean solution but the combination of those two measures does make sense.”

Professor Carl Heneghan, of the Centre for Evidence-Based Medicine at Oxford University, criticised the plan and suggested the 28-day method is his preferred option.

He said: “It doesn’t make sense.

“The public are so confused by this and all they will see is the highest number and that up to 100 people a day are still dying.

“What they should do, if they accept they don’t know how to make sense of this, is to publish the raw data and so people like us can analyse it.”

Following the results from July which saw 2,158 deaths across England and only nine in Scotland, Professor Heneghan argued most of those will have been caused by something other than the pandemic.

The current method was introduced at the start of the pandemic and government officials have grown frustrated the system is still being used.

PHE have continually said they would review the current system of counting over the summer period.

The Office for National Statistics also produces its own figures which includes all deaths where COVID-19 is mentioned on a death certificate.

But this has been described as an over-estimate as pneumonia and other conditions were included as coronavirus symptoms.

The source continued: “People want statistics to give reassurances and clarity, but things are never black and white and you have to use different statistics for different purposes.”

The UK has the highest death toll in the whole of Europe after surpassing 46,000 and fears of a second spike have been raised.