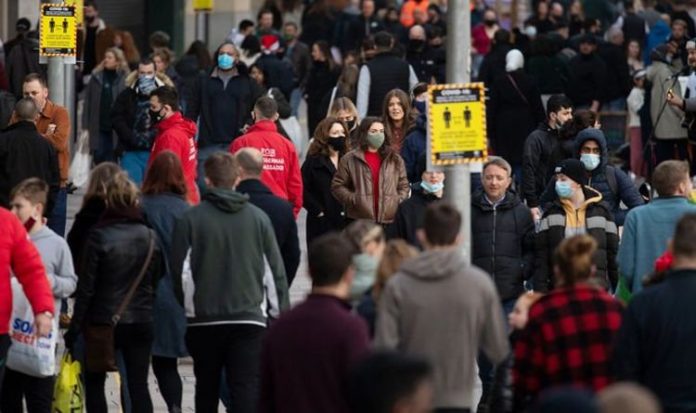 Most areas of England could be plunged into Tier Four restrictions following the latest review of the situation. Boris Johnson met with senior ministers last night to decide where the draconian measures are needed most to curb the spread of the virus. Health Secretary Matt Hancock will announce the decisions to the House of Commons this afternoon.

The meeting of the so-called Covid-O committee comes amid claims that two-thirds of England, including parts of the Midlands and the North, could be forced into the highest Tier.

Around 24 million people – 43 per cent of the country’s population – are already living under the most severe restrictions.

London and several areas in the South East and East of England were ordered into Tier Four ahead of Christmas amid fears about how easily the newly-identified coronavirus variant spreads.

Areas including Oxfordshire, Norfolk and Suffolk were plunged into Tier Four on Boxing Day.

Cases in the UK have climbed above record levels within the last week, which has seen daily rises of more than 40,000.

The government has been investigating the variant, which could be up to 70 per cent more transmissible and has now been found in other countries.

The government’s chief scientific adviser, Sir Patrick Vallance, said the variant accounted for 60 per cent of London’s cases by December.

There are also growing fears England could be plunged into “Tier Five” restrictions within days in a desperate attempt to stop the spread of the new variant of the virus.

Cases in the UK have climbed above record levels within the last week (Image: GETTY)

Scientists guiding the Government through the pandemic are understood to have advised Mr Johnson to impose tougher measures than those rolled out in November’s lockdown.

One of Number 10’s scientific advisers today warned England must be plunged into a third national shutdown to prevent a “catastrophe” in the New Year.

Professor Andrew Hayward, an epidemiologist at University College London and member of SAGE, warned the country is entering a “very dangerous new phase of the pandemic”.

Restrictions in Tier 4 are effectively lockdown rules, with people told to stay at home unless they have a reasonable excuse to head out, like shopping for essentials or exercise, and non-essential retail must close.

One of Number 10’s scientific advisers today warned England must be plunged into a third national shutdown (Image: EXPRESS)

It bans meeting people you don’t live with indoors and allows for meeting a maximum of one other person outside.

Those who gather in large groups face a £200 fixed penalty notice for the first offence, which doubles up to a maximum of £6,400 for repeated breaches.

Tier Two Cumbria is one area that could find itself in the firing line for Tier Four, with three of the county’s six boroughs seeing their Covid infection rate – the number of new cases per 100,000 people – double in size during the week ending December 22.

Department of Health statistics show Eden, home to around 50,000 people, had a rate of 422.5 during the most recent week data is available for – up from 200.9 in the previous seven-day spell. It stood at 41.3 at the start of the month.

It means the borough, which includes Penrith, recorded more confirmed Covid cases for the size of its population than several councils already placed under Tier Four, including parts of Surrey, Berkshire and Oxfordshire.

And Barrow-in-Furness – another part of the county – was one of just 27 areas that recorded fewer cases week-on-week. England’s 288 other boroughs saw their outbreaks stay stable or grow, with 35 authorities seeing infections double over the same duration.

Local health bosses fear the rapid growth in cases across parts of the county, which borders Scotland, is being driven by the same coronavirus mutation that spread rapidly across the Home Counties.