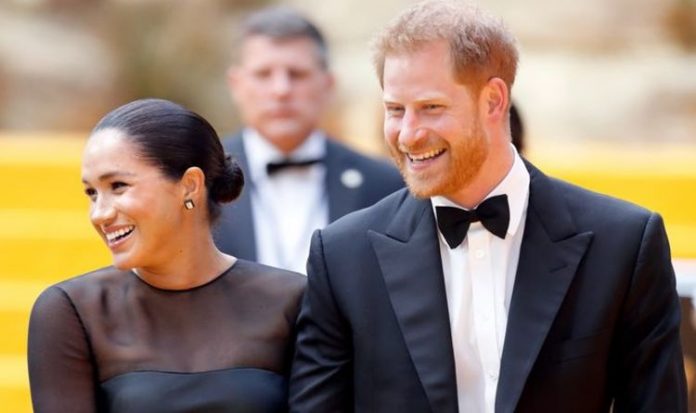 In the episode, the Duke and Duchess of Sussex reflect on the past year with a host of famous names. They included musician Sir Elton John, TV personality James Corden and author Matt Haig.

As ever with the two royals, the venture was met with both support and criticism on social media.

Some users voiced confusion about “privacy,” referring how the two allowed their son Archie to appear on the episode despite the royals hitting out at press intrusion in the past.

One user hit back: “A private life means they can share details of their life when they want to and not when someone forces them to. It really isn’t that difficult to understand.”

In any case, much of the podcast focussed on the celebrity guests.

James Corden revealed how the Covid-19 pandemic had made him realise how he was “happy” to stay at home and record videos there.

He joked: “I could lose a day just staring at the corner of a rug.”

Sir Elton John called 2020 “the worst year I’ve ever known”, but encouraged listeners to “go onwards and upwards” for 2021.

Mr Haig, author of popular books ‘Notes on a Nervous Planet’ and ‘Reasons to Stay Alive’, introduced himself as a “writer”.

Meghan then chimed in, insisting the author was being “very modest”.

Of the pandemic, Mr Haig said: “I was addicted to the news and found myself scrolling and scrolling and falling down a sort of Covid rabbit hole.”

The podcast marked the first episode from the Sussexes’ deal with audio streaming service Spotify.

The deal was signed for an undisclosed amount, the BBC reports.

Prince Harry has said the project is about “different perspectives and voices that perhaps you haven’t heard before” and finding “common ground”.