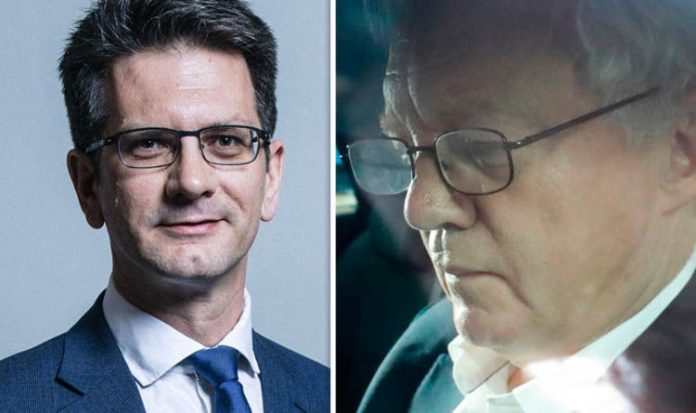 Deputy Brexit Secretary Steve Baker followed the lead of Mr Davis, who last night resigned saying he could not “sell out his own country.”

Mr Baker joined the Department for Exiting the EU as Brexit Under-Secretary of State in June last year.

His dramatic decision sent the Tories into freefall and may spark a Brexiteers’ rebellion against Mrs May.

Stark warnings have already been issued by Tory MPs against Mrs May’s future as a leader.

He said it had “basically cleared out the whole of the Exiting the European Union department”.

Speaking to ITV’s Good Morning Britain, he added: “I take my hat off to him.”

He added: “I think with the now-discredited Chequers agreement the prime minister is going to have to have a complete re-think on this.

“There’s no way she’s going to get that proposal through Parliament.

“Not even through the government benches.”

Suella Braverman, parliamentary Under-Secretary of State at DExEU, was believed to also have quitted during the night, but it has been later confirmed she remains in the post as minister in the department.

Tory Brexiteer MP Andrea Jenkyns, who previous quit so she could speak freely about Brexit, hit out directly at the prime minister, saying she would “100 percent” submit a letter to the backbench 1922 committee to push for a leadership election.

Before the resignations, it was understood a leadership challenge against Theresa May was imminent with letters calling for a no-confidence vote piling up.

Mrs Jenkyns added: “I’d put the letter in if these red lines were severely watered down and we had one foot in, one foot out.”

One senior pro-Brexit source told the Guardian the Brexit ministers’ move was “terminal”.

He added: “We think this is going to lead to a bigger split than Maastricht, on a more serious issue, with a smaller majority, and it’s not Tony Blair that lies on the other side of all of this, it’s Jeremy Corbyn.

“We think it’s an absolute disaster.”

The Brexiteers were joined in their support to Mr Davis and Mr Baker by Marcus Fysh, MP for Yeovil.

He wrote on Twitter: “I am very happy to hear the news of @DavidDavisMP and @SteveBakerHW resignations.

“Men of principle who wish to honour people’s decision to leave the EU and negotiate well.”

In Mr Davis’s official resignation letter, he said: “The national interest requires a Secretary of State in my department that is an enthusiastic believer in your approach, and not merely a reluctant conscript.

“While I have been grateful to you for the opportunity to serve, it is with great regret that I tender my resignation from the Cabinet with immediate effect.”

He stated that the current direction of Brexit policy would leave the UK in “at best a weak negotiating position, and possibly an inescapable one”.

The backlash against Mrs May started on Friday, minutes after the Chequers plan was unveiled.

Labour Keir Starmer, Shadow Brexit Secretary said: “It is farcical that it has taken two years for the Cabinet to even attempt to agree a position on the basics of our future relationship with the EU.

“This looks like a sticking plaster rather than the Government’s final position.”

Mrs May is due to face the House of Commons today, when she is set to present her plan as the “right Brexit” for Britain.