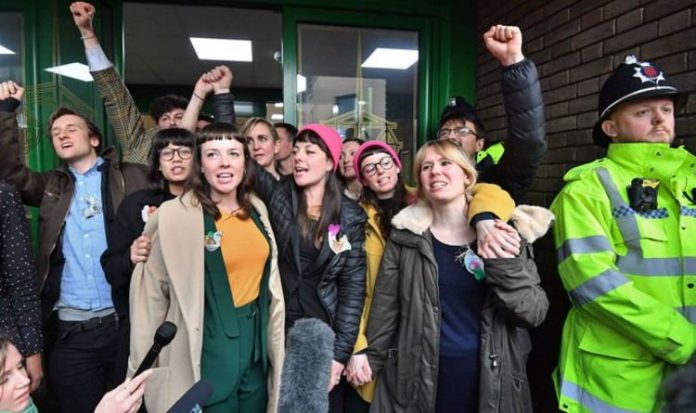 The “Stansted 15” cut through the Essex airport’s perimeter fence in 2017 – preventing the Home Office repatriating migrants to detention centres in Nigeria, Ghana and Sierra Leone. Convicted under the Aviation and Maritime Security Act, three were given suspended jail sentences and the others handed community orders. But yesterday, in a written judgment, the Lord Chief Justice, Lord Burnett, sitting with Mr Justice Jay and Mrs Justice Whipple, overturned the convictions.

They ruled the activists should not have been prosecuted for the “extremely serious offence” they were charged with “because their conduct did not satisfy the various elements of the offence”.

It added: “There was, in truth, no case to answer.”

The 15 claimed their action stopped deportations of people at risk of harm in their destination countries. In the 2018 trial, prosecutor Tony Badenoch QC said the defendants had “placed the safety of the airport in a likelihood of danger”.

Yesterday he told the court: “We don’t accept that the Act is constrained to terrorism and nothing else.”

But her Twitter comment sparked anger, with one reply saying: “Those due to be removed included 25 criminals who had been imprisoned in UK jails for serious offences including murder, rape of a minor and grievous bodily harm.”

A Home Office spokesman said yesterday: “The decision of the Court of Appeal centred on the offence for which the individuals were prosecuted and should not be viewed as condoning their behaviour nor the disruption they caused.

“Our priority is to protect the British public and we are forthright in our determination to remove foreign national offenders, where the courts allow.”