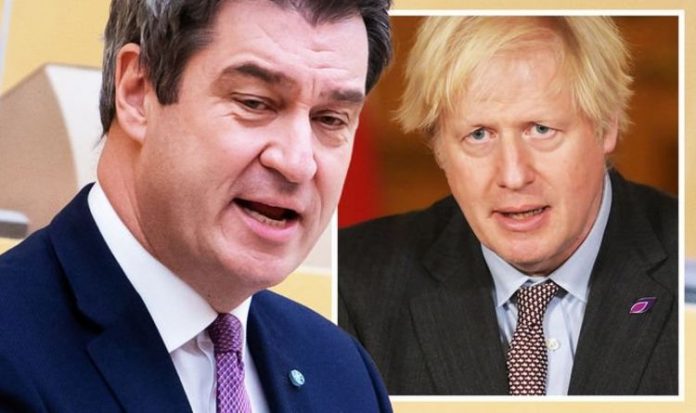 The EU is threatening to block millions of doses of the coronavirus vaccine from entering Britain. It comes after the bloc was alerted to shortages in member states, following a slow rollout cited as a result of Brussels bureaucracy. The European Commission has now announced plans to give national regulators the power to reject export requests.

The problem rests with the Pfizer-BioNTech vaccine, which the UK has a 40 million dose order of from its plant in Belgium.

The UK has already given 7.4 million people a first dose of a vaccine, with more than 470,000 having received a second.

In Europe, however, as things stand the bloc is tipped to receive just a quarter of the doses it had been expecting from AstraZeneca, in the UK, by the end of March.

Many have described the events unfolding as “vaccine nationalism” as the EU fears it may run out of vaccine while vials continue to be exported to Britain.

While concerns are primarily centred on the bloc’s running out of vaccine, comments from politicians within the bloc suggest a broader agenda may be in play.

He said: “It is difficult to explain that a very good vaccine is developed in Germany but is vaccinated more quickly elsewhere.”

Not only did it reveal Germany’s worries that the UK might get ahead, but also that countries in Europe might view the vaccine as a way to jump ahead of each other post-pandemic.

Reports suggest that Mr Söder could run for Germany’s Chancellorship later this year in the country’s September elections.

She was replaced by the “continuity candidate” Armin Laschet.

Mr Laschet is not guaranteed to become Chancellor, as the CDU must first nominate him as the party’s candidate.

Compared to Mr Söder, he has been ill-received by the German public.

An opinion poll carried out by Civey showed 12.1 percent believe Mr Laschet should become Chancellor later on this year, compared to 43 percent who would prefer Mr Söder.

Should Mr Söder wish to enter the election race – he has not yet expressed interest – Germany’s place in the EU could permanently change.

The CSU leader has been described as a “eurosceptic”, previously having clashed with Mrs Merkel over German integration into the bloc.

His comments on the UK prospering amid the vaccine debacle could be the prelude of a push for German growth in Europe, and a potential break away in the future.

Yanis Varoufakis, the former left-wing Minister of Finance for Greece, previously warned during an Oxford Union address that Germany could easily send the bloc into disrepair if it left.

He said in 2018: “The way it will happen is that Germany will leave the euro once the Berlin political class has had enough of the riff raff, asking Greeks, the Italians, the French, the Portuguese and so on.

“The moment they start sniffing in the wind that possibility they might have to bail out 2.7 trillion euros of Italian debt, believe you me, the Bundesbank already has plans in the drawer for printing Deutsche Marks.”

Meanwhile, the UK has steamed ahead with further vaccine development, now having a potential fourth vaccine that has shown to be 89.3 percent effective in large-scale UK-based trials.

According to the BBC’s medical editor Fergus Walsh, the ‘Novavax’ is the first in trials to show effective protection against the new Kent variant of the virus.