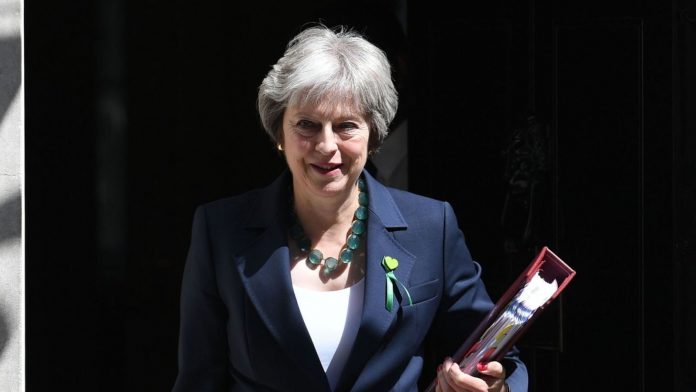 “To lead is to decide” – these were the prime minister’s words to her MPs at Wednesday’s 1922 committee meeting of backbench Tories.

Her decision – and therefore by her own logic – her leadership, was a long time coming – but in the end it came.

Her decision to opt for a soft Brexit, adverted to and presaged at December’s EU Council summit, where she gave a firm commitment to no hard border in Ireland, was fattened up and fleshed out by her proposals at Chequers.

The reaction – in the form of the resignation of two of her most important cabinet ministers, Boris Johnson and David Davis – perhaps shows why she fudged, delayed and prevaricated for as long as she did.

As the dust begins to settle, we can see that the Brexit phoney war is now over and the contours for its parliamentary endgame are sharper.

First, though – how damaged is the prime minister? She has survived, at least. That’s more than some might have thought.

READ  Red Arrows flight time: What time will you see the flypast in YOUR city? | UK | News (Reports)

In some ways she got lucky.

As one senior Conservative (no friend of Mrs May’s) told me last night: “Boris got it wrong – again. She only has two weeks ’til recess. It’s the worst time to resign. If she can keep her head down ’til then, she’s safe til October.”

Her survival and unexpectedly plucky performance in the House has even led to some excited bien-pensant chatter that the resignations have left her stronger than before.

The argument goes that Mr Johnson and Mr Davis were destined to resign, that their departure from the cabinet means she is now surrounded by allies, not enemies. She is liberated.

She may feel relief at not having to duck and weave to please the mansplaining Mr Davis and Mr Johnson every other Thursday from now on.

But medium term, it seems to me undeniable that the resignations of Mr Johnson and Mr Davis have weakened Mrs May for one very important reason.

Their resignations have legitimised betrayal – both within the parliamentary Conservative party and without.

As one despondent Leaver MP said to me: “I could have sold Chequers to my constituents. Now I can’t. All they’ll think now, whatever we put forward, is that it’s a sell-out.”

His despair is well-founded: Mr Johnson in particular, one of the only political figures the public recognise, with his warnings of “semi-Brexit”, and colonial status – seems to have gone out of his way to stoke the furnaces of Brexit apostasy.

Those furnaces now burn brightly within the Conservative party too.

As Jacob Rees-Mogg told me shortly after Mr Davis resigned: “It raises the most serious questions about the prime minister’s ideas. If the Brexit Secretary cannot support them then they cannot be very good proposals.”

Mr Johnson and Mr Davis were appointed to their jobs because they gave Theresa May – the Remainer prime minister – Brexiteer credentials. Now they’ve taken those spurs away, in spectacular fashion.

It was just about conceivable that had Mrs May been able to keep Mr Johnson and certainly Mr Davis in her cabinet, she might have attracted the lion’s share of Brexiteer support for her proposals if and when they come to the House of Commons in the form of a deal.

But now, with her ideas damned as heresy, if the Chequers ideas aren’t substantially altered (and it seems from the PM’s statement in the House that they won’t be) it is hard to see how or why the hardline Brexiteers can or will vote for them – and Mr Davis and Mr Johnson will lead the charge in opposition.

Brexit nirvana, they will say, can be achieved if we vote them down – and thereby secure the hard Brexit we crave.

If the PM had succeeded last June in winning a decent majority, this would be less of a problem.

That – despite her protestations to the contrary – was the election’s aim, to give her the space she needed to make the compromises she knew would necessary.

These internal party contortions inexorably flow from her failure to secure it. With no majority at all every Brexiteer vote, even the votes of the three ministers who resigned, will be pivotal.

So whilst in the short term, Mrs May might be cheered by having a few friendlier faces around the cabinet table, the crisis of her leadership has been postponed, not extinguished.

It is not obvious, without her Brexiteer MPs supporting Chequers, how she can guide a deal through Parliament.

And if she can’t, what exactly is the point of Mrs May? It is why she tried so hard to keep them onside. Without them there is only one option left for the prime minister, one remaining route through.

When the final vote comes, she must attract Labour votes.

If negotiations drag on to the last possible weeks, perhaps even into 2019, the PM could make a credible pitch to pro-Remain Labour MPs: vote for this, or we crash out with no deal at all. There is no time for an election. It’s this, or bust. Country before party.

She will therefore, in effect, be asking Labour to solve the Brexit riddle on her behalf.

A tacit acceptance that the Conservative party, with its deep, gorge-like fissures, cannot resolve the issue.

That will put Remainer Labour MPs in an invidious position. The tantalising chance to defeat the government, to remove a sitting prime minister will be theirs for the taking – but at the cost of plunging the country into profound crisis.

In those circumstances, even if Jeremy Corbyn tried to whip his MPs to vote against the deal, he might find it difficult to stop some of his most pro-European colleagues traipsing into the government lobby – especially if, the cost of their votes is a continued softening of Brexit.

Some of them, after all, represent some of the most Remain constituencies in the country – how will they explain to their constituents that they enabled the hardest Brexit possible?

Mr Corbyn might even get in on the act, seizing the opportunity to in effect control the Brexit process and sell himself to the country as a statesman.

And putting country before party might not be an entirely magnanimous act for Labour.

Getting the softest of Brexits through on Labour votes would be a devastating blow for Mrs May and the Tory party more generally. She would become the Ramsay MacDonald of the Conservative Party.

The Brexiteers would probably split and form a separate grouping in Parliament.

The Tory party – which has throughout its history been better at absorbing splinter groups than making them – would be more fractured and divided than at any time since the Corn Laws.

This is a danger to which Brexiteers are alive. They are alarmed at reports that the government has been briefing Labour MPs about their Brexit proposals.

Mr Rees-Mogg warned the PM of the dangers of that strategy: “It is a matter of grave concern. It would prompt a split, but a split from the top.”

In this scenario Mrs May would probably be finished as PM.

But I wonder if she has concluded, that her premiership, once Brexit is complete, is over anyway.

I am struck by the language she used yesterday at the 1922 committee, talking of doing “the right thing for the country.”

She may be preparing, psychologically and politically, for the ultimate compromise ahead. She might have concluded that in the end, the plaudits she is seeking are not from her party, but from history.

Never has the great Labour Foreign Secretary Ernie Bevin’s warning on the dangers Europe posed to British politics, seemed more appropriate: “If you open that Pandora’s Box, you never know what Trojan horses might fly out.”

It might be that Mrs May has decided that with the box opened it is her destiny to close it – by whatever means necessary.