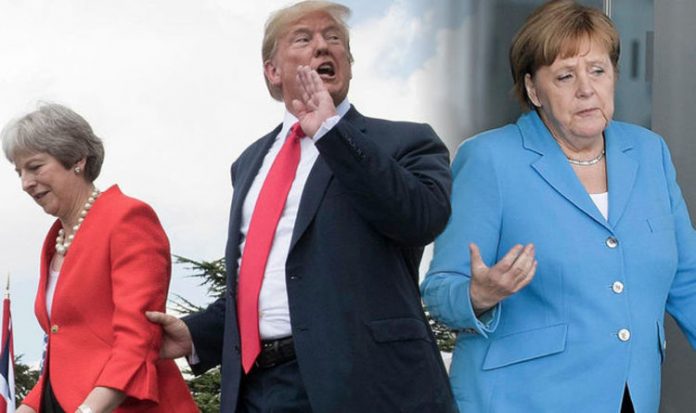 The US President in an explosive press conference with Theresa May hailed Brexit a “blessing” and declared he is prepared to do “whatever it takes” to maintain the special relationship with the UK.

However, on the US’ relationship with the US Mr Trump was less complimentary.

The US President repeatedly attacked Europe and Brussels over the “terrible way” the US had been treated by the European Union, particularly with trade agreements.

Mr Trump also zeroed in on Mrs Merkel’s Germany as he criticised the country’s reliance on Russia for energy, adding how can you look for peace when somebody has that much power over you.

Earlier Mr Trump ha attended Mrs May’s Chequers meeting and speaking at the end of the press conference the US President described Germany’s reliance on Russia as “terrible” and “horrific”.

He said: “To me it is a tragedy. I think it is a horrific thing that is being done, where you are feeding billions and billions of dollars from Germany primarily – and other countries – but primarily from Germany into the coffers of Russia when we are trying to something to have peace in the world.

“I think it is a horrible thing Germany is doing.

“I think it is a horrible mistake and as much as like Angela I was very open about saying it.

“ I think it is a horrible thing that you have a pipeline coming from Russia and I believe that Germany is going to get 56 to 60, or even 70 percent of their energy coming in from Russia.

“How can you working for peace and working from strength when omebody has that much power over your country?”

Mr Trump also warned the EU he will make them pay for years of “taking advantage” of the United States – describing the situation as a “disgrace”.

Mr Trump has sparked fears of a trade war with the bloc after his decision to impose tariffs of 25 percent and 10 percent on imported steel and aluminium respectively.

And he showed little sign of backing down during a characteristically bullish performance in front of journalists from all around the world.

He said: “We do not have a fair deal with the European Union right now on trade.

They treat the United States horribly and that is going to change.

“And if it does not change they are going to have to pay a very big price and they know what that price is.

“They are coming over on July 25 to see me and hopefully we can work something out.”