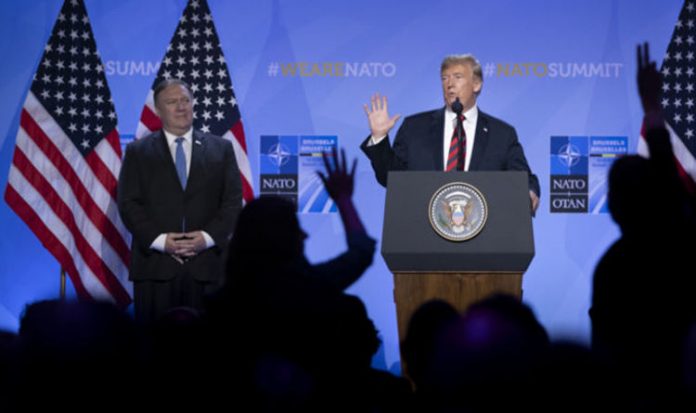 It is understood that he demanded that they all reach the threshold by 2021 but has yet to make headway on a further demand that this is then double to four percent of GDP.

Following an emergency session at the alliance headquarters in Brussels to discuss his demands, the US President said the other members have agreed an unprecedented increase in defence spending.

However there were few specific details while French President Emmanuel Macron immediately disputed his suggestion they had agreed in future to go beyond the existing Nato target to spend two per cent of GDP on defence.

Mr Trump, who on Wednesday singled out Germany in a blistering attack on its record, said he had made clear in Thursday’s emergency session that he was “extremely unhappy” with what had been on the table so far.

He infuriated Chancellor Angela Merkel by claiming that the pipeline deal had left Germany a “captive” that was “totally controlled” by Moscow because of a gas deal between Russia and Germany.

Nato Secretary General Jens Stoltenberg confirmed there had been a “frank and open” discussion, but Mr Macron denied reports that the president had threatened to pull out of the 69-year-old Western alliance if he did not get his way.

“President Trump never at any moment, either in public or in private, threatened to withdraw from Nato,” he said.

Earlier new Foreign Secretary Jeremy Hunt backed Mr Trump’s demands for allies which were not hitting the 2 per cent target to do more.

“We think President Trump is basically right that the foundation of a successful alliance is fair contributions by all parties,” he said.

“Britain is one of a minority of Nato countries that does spend 2 percent, but for Nato to be sustainable and successful going forward, all countries need to to step up to the plate.”

Mr Trump insisted that he had always been a strong supporter of Nato, but had made clear over the course of the two days his deep dissatisfaction with the way it was operating.

“Yesterday, I let them know I was extremely unhappy with what was happening and they have substantially upped their commitment and now we’re very happy and have a very, very powerful, very, very strong Nato,” he said.

Mr Trump did not go into details about what specific countries had promised but suggested they would be increasing their rates of spending “at a much faster clip”.

In his closing news conference, Mr Stoltenberg said the president had injected a “new sense of urgency” into the discussions on “burden-sharing”.

But when pressed on the figures, he referred only to the 40 billion dollars in increased spending which allies had promised since Mr Trump became president.

The emergency session was called followed a morning meeting between Nato leaders and the leaders of Ukraine and Georgia, amid claims Mr Trump demanded non-Nato members leave the room.

“It all came together at the end,” Mr Trump said.

“Yes, it was a little tough for a little while, but ultimately – you can asks anybody at that meeting – they really like what happened over the last two days. There is a great, great spirit leaving that room.”