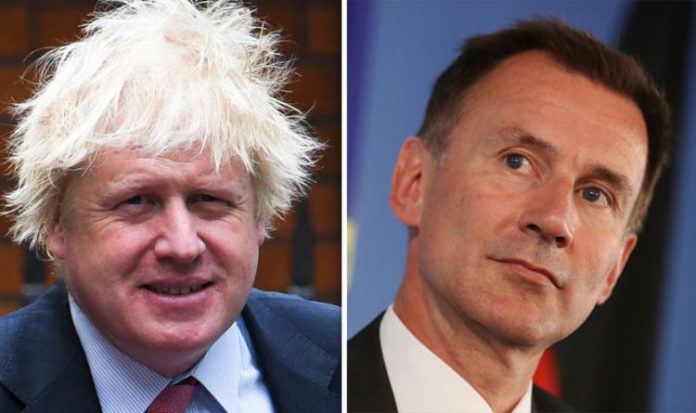 Mr Hunt, who is currently on a trip to the United States, took over in the post after Mr Johnson handed in his resignation following a cabinet meeting at Chequers in advance of the publication of a White Paper setting out the Government’s position on Brexit.

During the course of his visit, Mr Hunt was interviewed by the US-based website Axios, who quizzed him about replacing the former London Mayor at the Foreign and Commonwealth Office (FCO).

He said: “I don’t think anyone could be stylistically the same as Boris.

“So of course my style is going to be completely different.

“I don’t think that the substance is terribly different, particularly when it comes to relations with the US.”

The interview then turned to the praise lavished on Mr Johnson by US President Donald Trump, who suggested the former Foreign Secretary would §make “a great prime minister”.

Questioned as to whether Mr Trump was right in his assessment, Mr Hunt said: “Well Boris is someone I would never underestimate.

“This is a man who has changed the course of British history through his campaigning for Brexit.

“I don’t agree with him on everything, but, you know, who knows for the future?”

After David Cameron quit as Prime Minister in 2016 following the referendum result, Mr Johnson threw his hat into the ring to replace him, only to be undone after former supporter Michael Gove made a surprise bid for the top job himself.

Eventual winner Mrs May then handed him the high-ranking cabinet post – but his tenure was marked by controversy.

Having campaigned to leave the EU, unlike Mrs May, he continued to push for a more aggressive approach to Brexit negotiations, and eventually quit his job after the Chequers meeting.

His resignation letter explained: “Brexit should be about opportunity and hope.

“It should be a chance to do things differently, to be more nimble and dynamic, and to maximise the particular advantages of the UK as an open, outward-looking global economy.

Mr Hunt, who unlike Mr Johnson campaigned to stay in the bloc, was shifted over from the Department of Health and Social Care, has adopted a less bullish tone to Brexit than his predecessor.

Speaking in Washington earlier, he said a no-deal Brexit would further destabilise the international order at an “extremely vulnerable moment” in European history, describing the prospect as “one of the biggest threats to European unity.”

He added: “Britain would, of course, find a way to prosper [in the event of no deal] and we have faced many greater challenges in our history.

“But the risk of a messy divorce, as opposed to the friendship we seek, would be a fissure in relations between European allies that would take a generation to heal — a geostrategic error for Europe at an extremely vulnerable time in our history.”

Mr Hunt, who has met with US Vice President Mike Pence and Secretary of State Mike Pompeo during his three-day visit, added: “Our discussions showed real enthusiasm from the US administration, from the President down, for a UK/US Free Trade Agreement to be reached as soon as possible after we leave the EU, something that will benefit businesses on both sides of the Atlantic.”

The Foreign Secretary’s comments come amid a Cabinet split as Philip Hammond was firmly rebuked by Downing Street after reigniting the Tory feud over Brexit.

In a letter Mr Hammond warned a “no deal” Brexit would deal a shattering blow to the UK’s economy on the same day Brexit Secretary Dominic Raab sought to calm fears over talks collapsing.