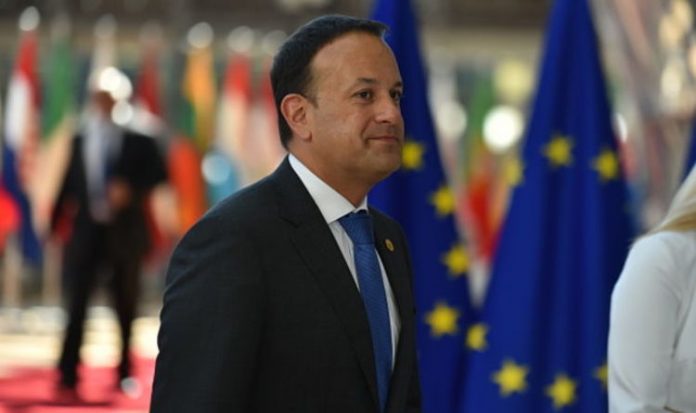 The majority of Northern Irish citizens would vote to scrap the border that separates the Irish Republic in the event of a hard Brexit, the poll by Deltapoll for campaign group Our Future Our Choice indicates.

The survey found 52 percent would support Irish reunification after Brexit by scrapping the border which has plagued trade deal negotiations with Brussels since the June 2016 referendum.

Up to 1,199 Northern Ireland citizens took part in the ballot which was conducted between August 27 and 30 and featured the question ‘Imagine now that the UK decided to leave the EU. Under these circumstances how would you vote in a referendum on the constitutional arrangements of the island of Ireland?’

Up to seven percent of voters were unsure how they would answer.

In the event of a hard border, 56 percent of those polled said they would vote for Irish unity, which would also see Ireland press for independence from the UK.

This comes after former Sinn Fein leader Gerry Adams said an Irish unity referendum is “no longer a matter of if but when”.

He added: “The issue of Irish unity is now a matter of almost daily conversation. Despite the negativity of both governments there is growing support for a referendum on unity and for a united Ireland.”

The politician’s remarks were echoed in past opinion polls, which showed support for Irish independence has been on the rise since Brexit.

In January 2013, just 17 percent of Northern Ireland voted for independence while a second Ipsos Mori poll in the months after the referendum saw the figure rise to 22 percent.

By the two-year anniversary of the referendum in June 2018 a Lord Ashcroft poll revealed 44 percent of Northern Irish citizens were in favour of reunification.

And a second poll conducted by Deltapoll for Scots campaign group Best for Britain revealed 47 percent would vote for an independent Scotland compared to 43 percent against, with 10 percent undecided.

The survey asked 1,022 Scots, with the results fuelling speculation that Brexit could result in the breakup of the union.

When another poll was conducted two years before the EU referendum, 32 percent supported a plan for an independent Scotland.

SNP deputy leader Keith Brown spoke at a national assembly in the Scottish Highlands where he stressed the importance of independence to a crowd of activists at the weekend.

He said: “A fresh case for independence is more vital than ever and that is what we are working on at the national assemblies, and with wider engagement enabling members of our party direct input and people from across the Yes movement and civic Scotland a say too.”

The division of Ireland took place in May 1921 the Government of Ireland Act 1920 came into force.