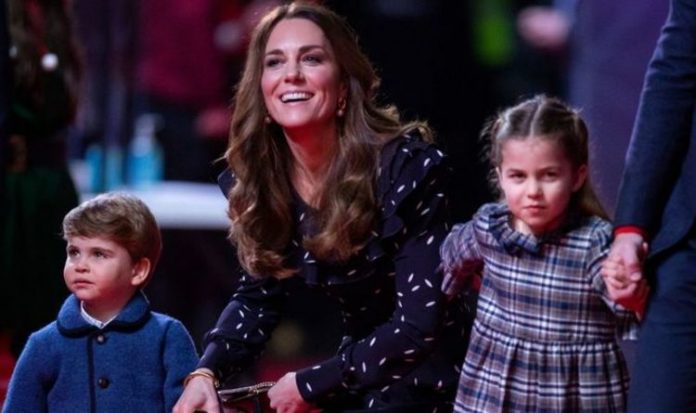 The pal revealed how Kate, 38, is “no pushover” when it comes to disciplining Prince George, seven, Princess Charlotte, five, and two-year-old Prince Louis. Prince William and his wife last week enjoyed a public family outing when they treated their children to a Christmas pantomime in London for key workers and their families.

Kate dazzled on the red carpet with her signature voluptuous blowout and a black and white speckled midi-dress and looked every inch the doting mum as she led her tots to the theatre.

A source close to the mother-of-three revealed how surprisingly normal Kate’s routine is behind closed doors.

They described her as “very chilled” when it comes to parenting – but not afraid to stamp out naughty behaviour when she sees it.

The friend of the duchess told People magazine: “It’s a normal, busy family home with kids running around and knocking things over.

“There’s no airs and graces.”

“When you see her behind closed doors with the children, she’s a very confident mom, and she’s no pushover.

“The children get told off if they act up.”

The revelation by Kate’s friend comes after a source close to the Cambridges detailed how the couple respond to their children if they act up.

In recent years Kate has taken a keen interest in early years development and this year she reached a major milestone in her work.

The duchess spoke passionately about the topic as she unveiled the findings of the UK’s biggest ever study on the early years.

The research was commissioned by The Royal Foundation of the Duke and Duchess of Cambridge and conducted by polling giant Ipsos MORI.

More than half a million parents responded to the 5 Big Questions survey.

The findings suggested parents and carers are in need of additional support and advice to ensure their little ones’ mental health is in good nick.

Speaking as the results were unveiled, Kate said she had been interested in the development of babies and young children ever before she became a mum herself in 2013.

She explained: “People often ask why I care so passionately about the early years.

“Many mistakenly believe that my interest stems from having children of my own.

“While of course I care hugely about their start in life, this ultimately sells the issue short.

“Parenthood isn’t a prerequisite for understanding the importance of the early years.”