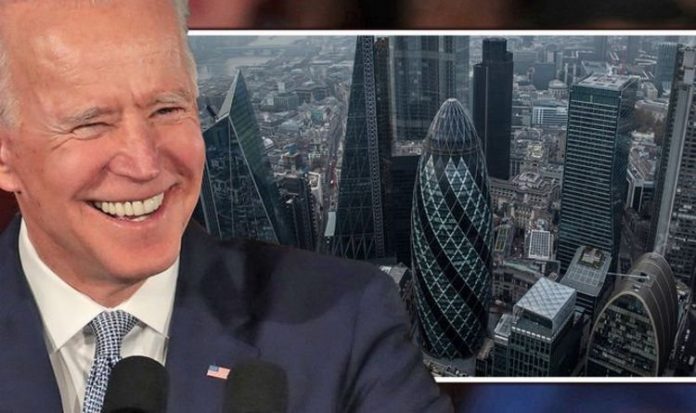 The City of London would be worse off than New York under an early draft for a cooperation agreement in financial services between Britain and the EU. According to people close to the talks, the early draft of the memorandum of understanding (MoU) has less substance than a deal the EU agreed with the United States in 2016. Chris Bates, a financial services lawyer at Clifford Chance, said: “This is the start of a negotiation – the Commission proposed text is clearly more limited than the UK ambition.”

Brexit talks with the EU started up again in January – as after months of wrangling, in a document spanning over 1,200 pages, there was very little mention of financial services in the trade deal.

The two sides hope there will be a “memorandum of understanding” in place by the end of March.

The City of London’s most influential lobby group CityUK is urging Brussels to grant regulatory equivalence to the sector, as it is “in the interests of customers and clients in the EU”.

Under the US deal with the EU, equivalence is treated as “outcomes-based.”

Britain has also called for EU equivalence to be outcomes-based, which would ensure that the focus would be on whether financial rules in Britain and the EU produce the same result.

However, there is no mention of outcomes-based equivalence in the draft EU-UK memorandum.

The move is likely to further boost Wall Street’s control over European markets – as according to Elisa Martinuzzi and Marcus Ashworth from Bloomberg, US President Joe Biden is already the clear winner from the EU and Britain’s squabbles over the financial services.

The two authors believe New York is taking trillions of dollars from London as a result.

They explained: “New trading limits between the UK and the continent have prompted a large chunk of this lucrative work to move across the Atlantic.

“Clawing back the trillions of dollars of activity that’s leaving London, quite literally overnight, could be a long slog.

“With counterparties from the EU now restricted from trading in Britain, and vice versa, dealers and investors predictably resorted to trading more interest-rate swaps in the US, a market that both the EU and the UK still recognise.

“But the degree to which the shift happened, without any obvious market glitches, has caught some participants by surprise.”

According to data compiled by IHS Markit, in the first two weeks of January, US derivative platforms — known as Swap Execution Facilities — saw their total market share jump to 83 percent from 75 percent for US dollar interest-rate swaps.

The shift in European trades was even more dramatic, the two finance experts noted.

In euro swaps, the SEFs gained 18 percentage points of market share to reach 39 percent; and even in sterling swaps, the US share jumped to 45 percent from 27 percent.

They added: “In theory, none of these changes in habit is set in stone.

“London and Brussels are still hammering out an agreement on financial regulations that could yet see the EU recognise UK bankers and financiers as ‘equivalent’ to the bloc’s, potentially allowing business to return to pre-Brexit behaviour just as quickly as it changed.

“But it’s relatively safe to say that whatever happens, Wall Street will be popping open the champagne.

“The shift in dollar business from London to the US will be hard to reverse, as will the euro trading, which the EU has repeatedly claimed it wants to bring back within its jurisdiction and, quite rightly, oversee. While much of this shift is largely about the plumbing of derivatives and share trading, involving relatively few jobs, business begets business in the financial markets.”

They concluded: “The EU’s top financial services official said on Friday that this was reality hitting London.

“But one hopes the bloc has considered the longer-term consequences for itself of Wall Street gaining more control over European markets. It could have avoided some of this by allowing equivalence for the UK finance industry from the get-go.

“Financial stability hasn’t been imperilled by Brexit so far, but a deeper capital market on its doorstep is still in Europe’s best interest.”

Wall Street also seems to have benefitted from the European Commission’s decision to grant “full equivalence” to American clearing houses at the end of last month.

Once recognised by ESMA, these US CCPs are able to provide central clearing services in the EU.

A clearinghouse acts as a mediator between any two entities that are engaged in a financial transaction.

Since the 2008 financial crisis, regulators have pushed more trades through clearinghouses to ensure visibility for supervisors.

Previously, vast swathes of the derivatives market were uncleared, with trades handled bilaterally between banks.

UK clearing houses have also been seeking a permanent equivalence decision by European authorities – but without much success.

Commenting on the move last month, financial expert Frances Coppola wrote on Twitter: “Oh blimey, that’s a kick in the teeth for Johnson.

“I’m not sure this is quite what Rishi Sunak had in mind when he talked about Big Bang II [for the City of London].”

With US “equivalence”, EU banks can use US clearinghouses and thus deal with Wall Street instead of London.

Over time, Brexit Britain could be frozen out.

At the moment, London is the world leader for the clearing of all types of currency-denominated derivatives including the euro.

In contrast, Paris, the second-biggest operator in the sector, clears just 11 percent of the transactions.