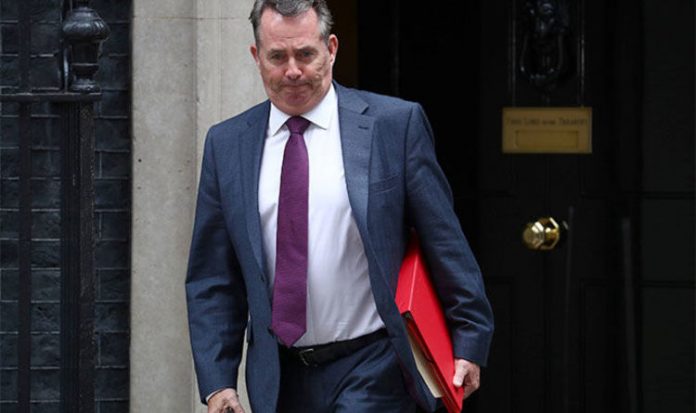 The Trade Secretary warned Brexiteers hoping to scupper the government that they risk costing British jobs.

Former Brexit Secretary David Davis, who resigned last Sunday, is planning to vote with the rebel MPs, who number around 60-80.

Mr Fox said: “Failure is not an option. The majority of parties elected in the last election ran on a  platform to leave the EU.

“The public – rightly – won’t accept anything that goes against the values of taking back control and neither will I.

“This Bill delivers on our commitment to trade and I urge everyone to back us in this fight for Britain’s future.”

The Bill was “vital” to allow Britain to enjoy “continued prosperity” and for “protecting jobs”, he added.

Eurosceptics’ amendments to next week’s vote include a demand that the UK abandon plans to collect duties for the EU unless member states do likewise.

They also want the Government to have a separate VAT regime from the EU and force it to commit to no border in the Irish sea.

This would kill the EU plan to keep Northern Ireland in the customs union.

If the Government accepts this amendment on an Irish customs border, Eurosceptics could withdraw the other amendments.

The amendments were tabled following the Chequers Cabinet blueprint, which led to to the resignations of Brexit Secretary David Davis and Foreign Secretary Boris Johnson.

He said: “Depending on the terms of the customs union, the EU could be freed from any obligation to defend the interests of UK businesses.

“This could have a devastating effect on jobs families and whole communities.”

The bill will allow Britain to retain the benefits of 40 existing trade agreements the UK signed as a member of the EU, he said.

But Brexiteers claim it will mean Britain remains subject to European laws.