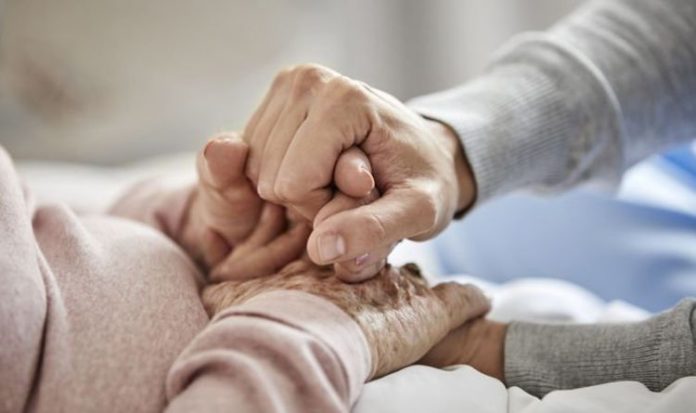 Minister Helen Whately said families would not have to wait for ­their relatives to receive their second ­vaccine dose before seeing them. The NHS announced earlier this month it had offered vaccines to residents at every eligible care home with older residents across England. Ms Whately said she hoped loved ones could hold their loved one’s hands during visits. It means much-awaited reunions could happen in just a matter of weeks.

Care Minister Ms Whately said ­yesterday: “What I want to do as we come out of the national lockdown is also increase the amount of visiting.

“I don’t see that we have to wait for the second vaccination dose, I want us to open up sooner than that.”

She added: “I really, really want to open up visiting in care homes more.

“To be clear, we have made sure visiting can continue even during this national lockdown.

“But I recognise it’s not the normal kind of visiting – it’s having to use screens, or visiting pods, or through windows of care homes that don’t have those facilities.

“As we come out of lockdown we do have to be cautious. Most residents in care homes have only had their first dose, and some of them only very recently, so it will be step by step.

“I’m determined people go back – even if it’s to be able to hold hands again and see somebody who you haven’t been able to see very much ­in the last few months and over the last year. I really want to make that happen again.”

The possibility of a resumption ­to meaningful visits comes after a year-long embargo because of the pandemic.

Not all visiting is banned, but ­families are angered at what has amounted to a postcode lottery, with homes and providers in some areas refusing entry while others have made every effort to reunite loved ones.

Some have allowed visits but only ­if a plastic partition or glass screen separates the resident and family member. Today, the Alzheimer’s Society will deliver a letter signed by 25,000 supporters to the Department of Health and Social Care in which it demands immediate “clarity and certainty” so normality can return.

The letter, addressed to Health Secretary Matt Hancock, was written by Kate Lee, the charity’s chief executive, who has only been able to ­communicate with her mother Barbara by shouting through a window.

Barbara, 80, has dementia so advanced she cannot talk.

Like hundreds of thousands of families across Britain, Ms Lee has found the ongoing visiting ban an ordeal.

She wants the Government to set out a clear timetable for the reintroduction of meaningful visits and launch an investigation into the rise in use of antipsychotic drugs for people with dementia.

The letter says: “This lack of contact from their loved ones means people with dementia are deteriorating at ­a much faster rate than they would ­otherwise. People with dementia in care homes are not just dying due to Covid. They are also dying from loneliness.

“Echoing the words of the Prime Minister on January 27 we, and ­thousands of families affected by dementia, want to see people’s lives back to as close to normal as possible.”

The Government is now under immense pressure to lift blanket bans on care home visits which have denied many families the chance to say a ­final goodbye to more than 30,000 residents who have died with the virus since the pandemic started.

The situation is particularly grave for those who have dementia. Seven in 10 of the 400,000 care home residents in Britain have the disease.

It means many families will ­have soon endured an entire year without a meaningful visit to those close to death.

Last week former newsreader Angela Rippon called for Prime Minister Boris Johnson to set out an immovable date when he reveals his roadmap out of ­lockdown on Monday.

Alzheimer’s Society ambassador Angela, 76, said: “My message to the Government is loud, clear and unequivocal: Sort it out. And do it now.”

Jenny Morrison, who co-founded care home access ­campaign group Rights for Residents, said: “People have died as a result of loneliness and ­emotional starvation and for those who survived, the resulting trauma will never be erased.

“The higher levels of social isolation experienced by those in care in the UK should never have been allowed to happen.”