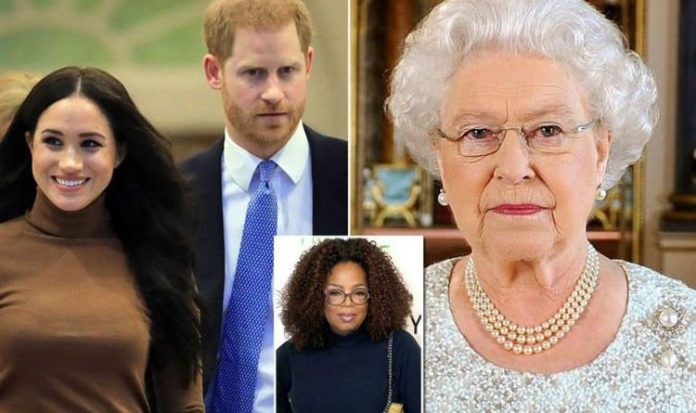 The Duchess of Sussex will stand by a promise to uphold Her Majesty’s values when they appear in the 90-minute prime time show – although a friend of the billionaire host said: “Nothing is off limits”. Next month’s CBS chat is the first interview with the Sussexes since they quit official royal duties last year. One source said of the appearance that as the Duke and Duchess were no longer working members of the Royal Family, decisions they took on media commitments were matters for them.

As non-working royals, they were under no obligation to inform the royal household, the source added.

The couple are said to have the greatest respect and love for the Queen and will not say anything to undermine that, according to a source.

But they are determined to fight to retain their royal patronages of sporting and cultural bodies.

Veteran royal watcher Joe Little, managing editor of Majesty magazine, said: “The Queen will put faith in the loyalty of her grandson and the fact that he will always be a member of the Royal Family and, she will hope, won’t want to damage the monarchy.”

He added: “This isn’t going to be an unscripted interview. It’s going to be carefully thought out and choreographed. But looking at the history of royal interviews, you just wonder if this will trip them.”

Harry and Meghan are to be interviewed by Oprah (Image: Getty)

Harry, 36, is said to be “very upset” after the Daily Express revealed recently he was set to lose his roles in the military. He and Meghan, 39, may also be stripped of other royal patronages given to them by the Queen.

The 94-year-old Queen believes they cannot continue to represent her and the monarchy while making money from their name in the US.

Royal aides fear that Oprah – a global TV icon who shot to fame with sensational chat shows in the 1980s – will want to make headlines with the interview after spending three years working for it.

But the 67-year-old is a friend of the pair and they trust she will also want to stay on good terms .An insider said: “It’s hardly likely to build bridges but there is always the chance the finished product is very tame.”

Harry is ‘upset’ he is losing his military titles (Image: Getty)

Mr Little pointed out however that when the Queen has put faith in her family with such interviews before it has not always turned out well, particularly with Prince Charles and Princess Diana in the 1990s and Prince Andrew in 2019.

Sources close to the Sussexes said yesterday the interview, billed by CBS as an intimate conversation about their lives as royals under intense public pressure, would be positive and focus on their new life in California.

But alarms bells rang as TV anchor Gayle King, Oprah’s best friend, said: “I’m told nothing is off limits. She can ask anything she wants.”

The couple are expected to record the chat this week.

Oprah has been working with Harry on a series about mental health issues and is the pair’s neighbour in Montecito. In a sign that perhaps they were intent on pursuing a commercial route long before they quit official duties, Harry and Meghan invited her to their wedding in August 2018.

It was claimed yesterday that, although they gave her a plum seat near the Queen in St George’s Chapel, Windsor, they had met her only once.

Their desire to make money was the issue that broke relations between Harry and his brother William.

Royal insiders noted the lack of mention of William and his wife Kate as aides offered congratulations when the Sussexes said this week that Meghan was expecting again.

The Queen has managed to stay on good terms with Harry but has upset him over removing his patronages.

Staff said that the Duchess had remained in touch from her £11million US home and could still help showcase the theatre’s work.

“She was very engaged and continues to be engaged,” said a spokeswoman for the venue on London’s South Bank. “She remains our patron. Our position hasn’t changed.”

But the Queen, who was NT patron for 45 years before giving Meghan the role two years ago, is said to be ready to wield the axe, after some supporters of the theatre raised concerns over having an absentee royal patron.

Mr Little said the Sussexes would not be happy to lose their patronages, adding: “But finding freedom comes at a price.”

In a review due by March 31, it is thought they will keep the charities they work for without directly representing the Queen, such as Harry’s Invictus Games and Meghan’s support of the animal charity Mayhew and the free clothes charity SmartWorks.