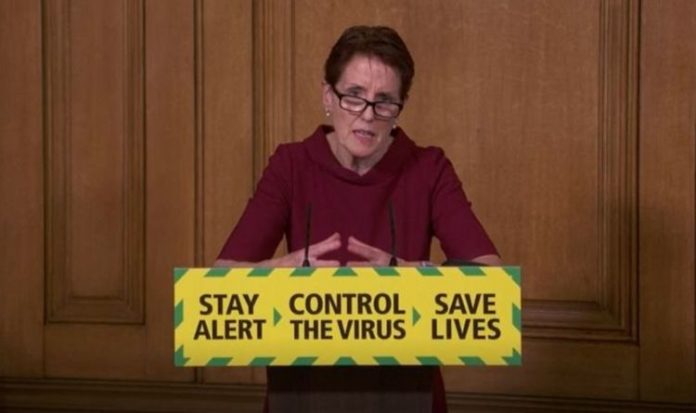 The figure was the highest since late May and up 52 percent on last Tuesday’s total of 241. Some 22,885 new cases were confirmed, an increase of seven percent from 21,331 on the same day last week. Health leaders have now called for urgent action to stop the rising tide of deaths.

Some hospitals have cancelled routine operations to cope with the surge in Covid-19 patients, it was said.

She said: “We continue to see the trend in deaths rising and it is likely this will continue for some time.

“Being seriously ill enough from the infection to need hospital admission can sadly lead to more Covid-related deaths.

“We can help to control this virus. We know that by washing our hands regularly, wearing a face covering and socially ­distancing we can save lives by slowing the spread of the virus.”

The UK’s official coronavirus death toll now stands at 45,365, with total cases confirmed through testing at 917,575 and set to pass one million within days.

Latest figures show there were 9,199 patients in UK hospitals on Sunday, including more than 800 in mechanical ventilation beds.

Hospital managers in Leeds revealed the pressure on beds had become “far greater than in the first wave” and said operations had been cancelled.

Staff at Leeds General Infirmary and the nearby St James’s University Hospital were told the growing number of admissions meant it is ­“looking even more likely” the city will be moved into Tier 3 of restrictions.

David Berridge, deputy chief medical officer at Leeds Teaching Hospitals, said there were 237 Covid-19 patients in wards on Tuesday, with 25 in critical care.

Mr Berridge said: “These numbers are close to the peak seen in the first surge and prevalence data indicates that it may continue to rise for another one to two weeks.

“Our current overall bed occupancy is far greater than in the first wave so there is very significant pressure on our ­inpatient capacity.

“Unfortunately, as a result, we have had to cancel some operations and expect this to continue throughout the week due to pressures on beds in all areas of our hospitals.”

Another hospital trust in South Yorkshire which runs Doncaster Royal Infirmary announced on Monday that the number of coronavirus patients on their wards was now “far beyond the first wave earlier this year”.

Rotherham Hospital also reported a jump in cases to beyond the spring peak.

Layla McCay, director at the NHS Confederation, said action was urgently needed to curb the rise in deaths and reduce pressure on the already stretched health service.

She said: “These figures clearly illustrate how grave the situation has already become, and how difficult the coming weeks and months are likely to be.

“Our members tell us that in many cases their capacity is severely stretched. This is only likely to deteriorate over time, as we see more Covid-19 patients needing hospital treatment, alongside those with the usual winter illnesses.

“Furthermore, if staff need to be redeployed to Covid-19 services, it will be even more difficult to restore and maintain routine services.”