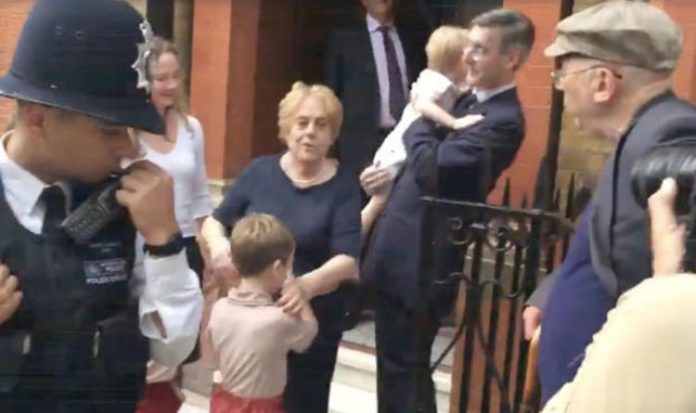 He also shouted at the three frightened youngsters, including Mr Rees-Mogg’s six-year-old son: “Your daddy is a totally horrible person.”

The children were shielded by their nanny Veronica Crook, Mr Rees-Mogg and his wife Helena de Chair on the doorstep of their Westminster home.

Downing Street last night led criticism of the attack by the group of activists, with MPs from all parties condemning the tirade, describing it as “abhorrent”, “disgusting” and “appalling”.


Anyone ignoring him to shout at his kids is a coward if nothing else. What disgusting, despicable behaviour

Others expressed concern that although at least two police officers were present no arrests were made.

Former Labour Cabinet minister Lord Adonis, an arch rival of Mr Rees-Mogg on Brexit, said: “Demonstrating outside Mr Rees-Mogg’s house and hustling his children is utterly deplorable. The police should sort this out immediately.”

Scotland Yard said it had received no complaint following the incident and were not planning to investigate.

Mr Rees-Mogg made light of it and said: “The police behaved absolutely correctly. There is no advantage in making things more heated.”

Politicians and figures from across public life were angered by the protesters for targeting the politician’s family.

The Archbishop of Canterbury Justin Welby said: “This is appalling. There are plenty of ways you can tell MPs you disagree with them. But targeting their children is shameful. We are – and must be – better than this. We’ll be praying for Jacob Rees-Mogg’s family at Lambeth Palace tonight.”

Labour MP Stella Creasy, who has faced barrages of online abuse including rape threats, said: “This is sick. You can see how upset his kids are. This isn’t Left-wing or justified.

“Whatever disagreements you have with Jacob Rees-Mogg targeting his children and family is beyond the pale because no politicians family should ever be considered fair game.”

Deputy Labour leader Tom Watson said: “This is utterly appalling. It is completely unacceptable conduct to frighten children and families.”

And Labour MP Neil Coyle added: “Mogg is right there. Anyone ignoring him to shout at his kids is a coward if nothing else. What disgusting, despicable behaviour.”

The Prime Minister’s spokesman described the targeting of Mr ReesMogg and his family by anarchist protesters “completely unacceptable”.

He said: “No elected member or their family should be subjected to harassment or abuse in that way.”

During the confrontation Mr Bone, 71, told the children: “Daddy won’t say how much he pays your nanny, his nanny who looks after you. Daddy doesn’t pay her very much.

“Daddy says the minimum wage doesn’t count for anything, or the London minimum wage. “Daddy doesn’t pay nanny much, so poor nanny Crook who looks after you and wipes your bottom, she doesn’t get enough money every week.

“But daddy, he doesn’t care because he’s too busy posing as a Latin eating, gut-orientated toff which he does pretty well.”

Mr Bone taunted Ms Crook as she emerged on the doorstep, saying she had “Stockholm syndrome” because she wouldn’t reveal her salary.

She asked Mr Rees-Mogg, standing just behind her and cuddling his smaller child: “Do I?” He replied: “No.”

When someone questioned another protester’s actions, he was told: “Well too bad. If you don’t like it, **** off.”

Ms Crook told the protesters: “All I can tell you is I’m very happy.”

Last night Tory MP Sarah Wollaston said: “This is absolutely disgusting, there is never an excuse for targeting children or families.

“These people should unequivocally apologise.”

Ben Gummer, son of John Gummer – who served in Margaret Thatcher’s Cabinet – said: “I am the child of a politician who had a big media profile.

“I had my share of this stuff. All I can say is that seeing it done to Jacob Rees-Mogg’s children still brings an oh so angry lump to my throat.

“It is a cruel thing to do to a child and it will mark them for ever.”

Mr Rees-Mogg dismissed the stunt by Mr Bone, author of a book named Bash The Rich, saying: “It was a small protest by anarchists which not surprisingly was disorganised, unpunctual and short-lived.”

The MP for North East Somerset defended the officers for not stepping, saying: “We’re a free country. They weren’t violent. They aren’t admirers of mine. I’m in public life and not everybody is going to like me. That’s a reality of public life.

“I’d prefer if it hadn’t happened but I don’t want to get it out of perspective. Much worse things happen to many other people.”

Mr Bone stood by his actions after the protest saying the children were going to go to Eton “like their father” where they could expect to be “mercilessly bullied anyway”.

He said: “Jacob Rees-Mogg brought his family outside and into our demonstration.

“I stand by everything I said. I think that my comments to his children are nothing in comparison to the policies that Rees-Mogg believes in.”

A video posted on Class War’s Facebook page said people were getting their “knickers in a twist”, saying the MP’s family had come outside after the protesters arrived.