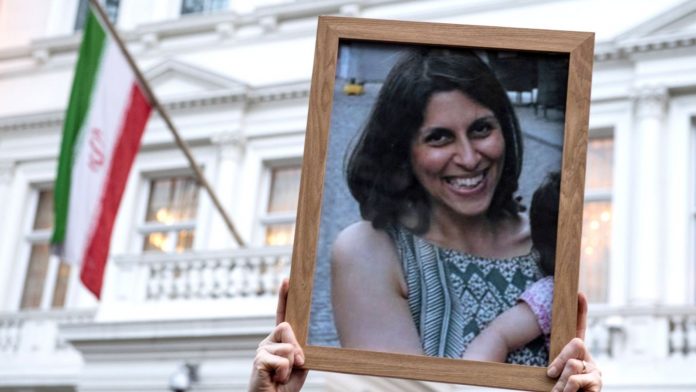 Jeremy Hunt has been given a painted stone by the family of a British-Iranian mother jailed in Tehran as a reminder of the promise to leave “no stone unturned” in the quest to free her.

The pebble, painted with words “#FreeNazanin”, was presented to the foreign secretary by Nazanin Zaghari-Ratcliffe’s husband, Richard, on Thursday.

Mr Hunt lamented the “shocking and desperate situation”, promising to “do everything we can to bring her home”.

Mrs Zaghari-Ratcliffe was handed a five-year jail sentence in 2017 on secret charges after travelling to Iran to see relatives with her daughter.

Her husband, Richard Ratcliffe, lobbied hard for former foreign secretary Boris Johnson to apply for diplomatic protection to release her.

Mr Johnson said in November last year: “I can you tell that people here in the Foreign Office and across government have been working very hard over the last 19 months to secure the release of Nazanin Zaghari-Ratcliffe, and indeed to solve some other very difficult consular cases in Iran, and we will continue to do that.

“We will leave absolutely no stone unturned in our efforts to do that.”

He was later accused of potentially increasing Mrs Zaghari-Ratcliffe’s jail sentence by suggesting she had travelled to Iran to “train journalists”.

Mr Hunt has now inherited the case and hailed the “strength and resilience” of her and her family.

The foreign secretary has promised to make the case a “top priority”, Mr Ratcliffe said.

Good to meet Richard Ratcliffe and his family yesterday. It’s a shocking and desperate situation and they are showing extraordinary strength and resilience, as is Nazanin. We will do everything we can to bring her home. pic.twitter.com/tPTfg6SZFL

“It’s a fresh start and we had a good meeting,” he added. “We all came away more positive than when we went in.

“She’s still in prison and we will see how things go.

“The former foreign secretary was sincere in wanting Nazanin home.

“There was baggage in the way it all happened and a fresh start allows for some of that baggage to be laid to rest.”