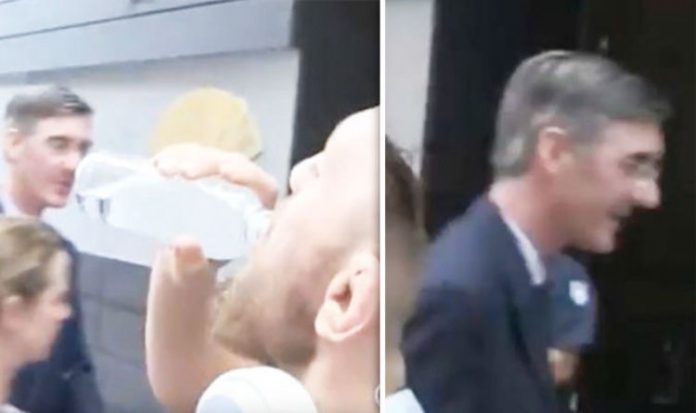 The MMA fighter was being mobbed by fans outside his New York hotel when the dapper Tory MP Jacob Rees-Mogg sauntered past in his trademark double-breasted suit.

Neither of the men appeared to recognise each other. Mr McGregor, who is dubbed ‘The Notorious’ by UFC fans, chugged from a bottle of water.

The Conservative MP for North East Somerset ushered his children past, one of whom was wearing a suit strikingly similar to his father’s.

The Irish fighter was in the US due to a court appearance relating to an altercation in April.

He is set to face Russian Khabib Nurmagomedov later this year.

Mr Rees-Mogg posted a photo of himself and his family on the viewing platform of the iconic Empire State Building.

But his visit to the United States has not stopped his campaigning over Brexit.

He tweeted an angry response to an interview with Bank of England Governor Mark Carney, where he warned of the risks of a no deal Brexit.

Mr Rees-Mogg said: “Mark Carney has long been the high priest of project fear whose reputation for inaccurate and politically motivated forecasting has damaged the reputation of the Bank of England.”

Mr Carney told the BBC Radio 4 Today Programme: “I think the possibility of a no-deal is uncomfortably high at this point.”

“A moment ago, I gave you a glass half full representation of where competition should go in banking.

“This other half of the bank is entirely glass half empty all of the time.

“Our job is to look at what could go wrong. What are the outcomes that could happen and what could we do to make sure the financial system is in a robust position so that it lessens the impact of a bad deal, in this case, a no-deal Brexit.

Mr Carney went on to say a no deal Brexit “is highly undesirable. Parties should do all they can to avoid it.”