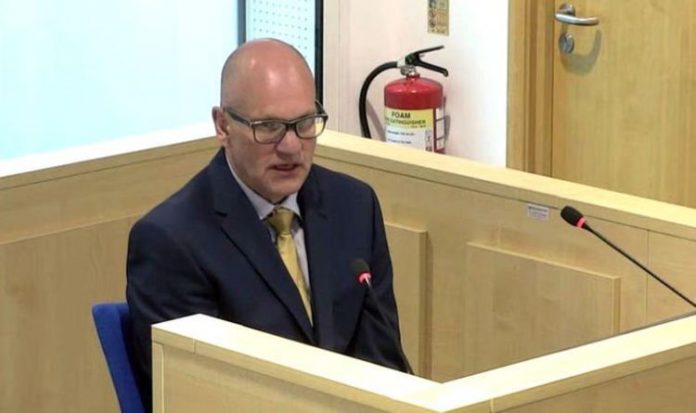 Alan Topping, a duty command support officer on the night, told a public inquiry that specialists who could have treated and moved the injured got there too late. The first fire engine did not arrive until two hours after the explosion on May 22 2017 triggered by suicide bomber Salman Abedi. He slaughtered 22 people and injured hundreds at the end of an Ariana Grande concert. Mr Topping said: “We didn’t respond and we didn’t do our jobs to make a difference. It took me a couple of days to put my shirt back on, such was the strength of my feelings.”

He explained he was not even aware of the blast at 10.31pm until he received a call from his control room more than a hour later which informed him of “loads of casualties” and reports of a gunman.

On his return from dealing with a mill fire in Stockport, Mr Topping assumed colleagues were at the Arena and expected “something like 10 to 12 pumps with specialist teams would have attended with lots of officers”. He was “shocked” on his arrival at about 12.25am when he saw five fire engines “with a lot of firefighters hanging around, some lying down”.

Mr Topping told Paul Greaney QC, counsel to the inquiry, there was “a lot of anger, upset, confusion” among crews who were impatient at being kept away from the scene.

A firefighter recalled a paramedic “came over crying, pleading with us to help. Her exact words were, ‘What are you doing just stood around here? There are people dying, we need your help’.”

She added: “I’ve just taken an 18-year-old girl in the ambulance who died on route to hospital and you lot are just stood around.”

Mr Topping told the inquiry that senior colleagues said bosses were not allowing them to attend.

The inquiry heard previously that none of the blue light services met at a rendezvous point to plan a response.

Mr Cooper asked if it was correct that “many, if not all” firefighters turned their back on a senior officer when he was unable to explain the lack of response at a debriefing shortly after the attack.

Mr Topping said: “People showed their emotions differently whether it was turning away, walking away, people were crying.

“I have never seen firefighters crying at a debrief. Firefighters and officers felt such shame, disappointment about why we didn’t attend to help people.

“I felt ashamed to be a firefighter and I felt like we had let the people of Greater Manchester down. We were there to help and we didn’t do our job. I just feel so sad we didn’t attend for the families.”

On his retirement in September he still felt coordination between the city’s emergency services had not improved sufficiently.

The public inquiry, which is looking at events before, during and after the arena bombing, continues.