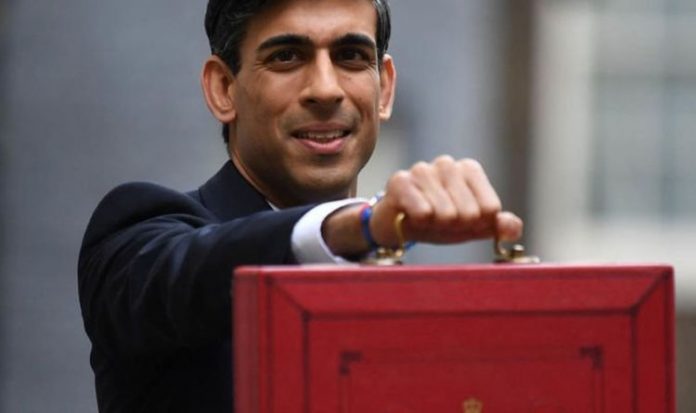 Rishi Sunak urged not to ‘hammer’ businesses by Mullins

Rishi Sunak will extend his furlough scheme far beyond expectations, funding most of the wages of employees shut out of work by the virus crisis for another three months. The extension could cost taxpayers an extra £7billion, leading to a total furlough bill of £60billion to cover the pandemic. The scheme will now last until the end of September to give firms extra time to rebuild as the lockdown is eased. Mr Sunak will also announce further support for the self-employed, with more than 600,000 people – many of whom became self-employed last year – now eligible for cash grants.

His latest measures will be at the heart of a three-point plan focused on support for jobs and livelihoods, honesty about the state of the public finances following the £280billion cost of responding to the pandemic and the need to build the UK’s economy of the future.

Ahead of his keynote financial statement, the Chancellor said yesterday: “Our Covid support schemes have been a lifeline to millions, protecting jobs and incomes across the UK.

“There’s now light at the end of the tunnel with a roadmap for reopening, so it’s only right that we continue to help businesses and individuals through the challenging months ahead – and beyond.”

Mr Sunak’s move will extend the furlough scheme for more than two months beyond the June 21 date set for ending most Covid restrictions in Boris Johnson’s roadmap out of lockdown.

Employees on furlough will continue to receive 80 percent of their current salary until the scheme ends.

In the final months, firms will be expected to contribute more to their salaries. They will be asked to fund 10 percent of pay in July and 20 percent during August and September.

Rishi Sunak is preparing to use all the Treasury’s firepower in today’s Budget (Image: Getty)

More than 11 million employees have been put on furlough since the Coronavirus Job Retention Scheme was launched when the pandemic struck a year ago.

So far, the scheme has cost an eye-watering £52billion and is set to rise to £60billion in total. Around 4.7 million workers are still furloughed. But Mr Sunak will today repeat his promise that the Government will do “whatever it takes” to support jobs and livelihoods affected by the pandemic.

In his Budget speech to MPs, the Chancellor is expected to say: “We’re using the full measure of our fiscal firepower to protect the jobs and livelihoods of the British people.

“First, we will continue doing whatever it takes to support the British people and businesses through this moment of crisis.

“Second, once we are on the way to recovery, we will need to begin fixing the public finances. I want to be honest today about our plans to do that.

“And, third, in today’s Budget we begin the work of building our future economy.”

Mr Sunak took time out from his Budget preparations yesterday to hold a virtual call with around 50 people who have been helped by Government support schemes during the pandemic.

To help the self-employed, the Chancellor will announce that a fourth self-employment income support scheme grant will be available to claim from next month worth 80 percent of three months’ average trading profits up to £7,500 in total.

When the grant was first launched, payments were based on tax returns for 2018-2019 leaving many newly self-employed workers unable to qualify for cash.

Rain Newton-Smith, chief economist at the Confederation of British Industry, said: “Extending the scheme will keep millions more in work and give businesses the chance to catch their breath as we carefully exit lockdown.

“The furlough scheme has been a stand-out success throughout the crisis. It’s great to see more support for the newly self-employed, who have missed out over the last year.”

Newly self-employed will be able to get government help (Image: Getty)

Key measures Sunak will announce to put UK back on track:

Support for millions of workers will continue as the UK-wide furlough scheme is extended until the end of September.

Employees will continue to receive 80 percent of their current salary until the scheme ends, with employers asked for a small contribution from the end of July.

The Chancellor is also set to announce that more than 600,000 people, including the newly selfemployed in 2019-20, will now be eligible for government support.

Already extended once, the temporary reduction in VAT from 20 percent to five percent is likely to be pushed back to the summer, possibly for three months beyond the current 31 March cut-off.

A delay could add £800million to the estimated £3.3billion cost so far.

A business rates holiday, launched last year to help firms ride out the virus crisis, is due to finish at the end of this month.

This is expected to be extended for retail, hospitality and leisure. Some associations want the support to run to the end of the year, or into 2022.

A new mortgage guarantee scheme to help buyers with a five percent deposit to get on to the property ladder is set to be announced at the Budget.

The initiative is aimed at helping those looking to buy a house of up to £600,000. The government will offer lenders the guarantee they need to provide mortgages that cover the other 95 percent. It will be available to lenders from April.

The Chancellor is expected to accelerate investments in transport, infrastructure spending and top-up pots for regenerating town centres.

The transport sector is earmarked for more investments (Image: Getty)

The suspension of stamp duty on property sales of up to £500,000 was announced in July and is due to finish at the end of this month. But Mr Sunak is preparing to extend the stamp duty holiday by three months, according to reports.

A £20-a-week uplift will run out in April but an extension for six months is likely after calls from all sides of the political spectrum for poorer families to receive support while restrictions remain in place.

Last month, the green homes grant for insulating homes was cut back to save around £1billion. The budget is expected to roll out further measures to bring down carbon emissions, including a more extensive electric vehicle-charging network.

A restriciton on the amount wealthier people can put into their pensions to £1million over their lifetime could save £250million in tax relief. Around 1.2 million people are projected to exceed the threshold by the time they start drawing on their private or occupational pension.

A new “flexi-job” apprenticeship is on the horizon and the government says that it will enable apprentices to work with a number of different employers in one sector. The government is set to invest £126million to enable 40,000 more traineeships.

A series of reforms will be introduced to encourage high-skilled workers, including researchers, engineers, scientists and those in the tech sector, to come to work at British firms.

Measures will include a simpler sponsorship process being introduced to reduce bureaucracy.

Mr Sunak also intends to reduce the burden on companies who have been wanting to sponsor skilled workers.

A rise in the headline rate of corporation tax could be on the cards. Some reports suggest plans are being considered to increase corporation tax to 25 percent from 19 percent.

Raising inheritance tax and capital gains tax rates will make little difference to the significant fiscal deficit as a result of Covid-19 but they would be perceived by some as addressing the imbalance of wealth in the UK.

The British Beer & Pub Association last month said a letter signed by 68 Conservative MPs had been sent to the Treasury, imploring Mr Sunak to cut beer duty. There have been some reports beer duty will be frozen.

Community groups will be given up to £250,000 to help to take over struggling pubs in their areas, ensuring they remain at the heart of towns and villages for decades to come.

This includes a £300million boost for the Culture Recovery Fund and an extra £90million to support our National Museums and cultural bodies to bridge the months ahead.

There will also be nearly £20million for cultural projects in regional towns and cities.