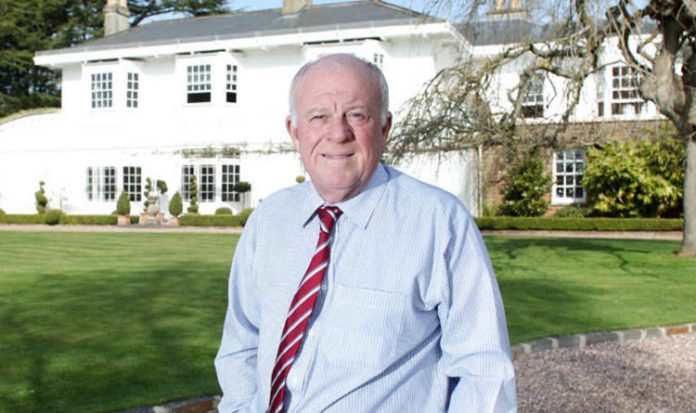 Mr Hargreaves, who has been honoured with a CBE and is valued at £3.6 billion, has dismissed the scaremongering over failing to get a trade deal with the EU and instead said that opting for world Trade Organisation (WTO) terms will be best for Britain.

He told Bloomberg: “I guarantee my entire wealth (£3.6billion) that no deal will get us free trade (with the EU) – because the three biggest economies in Europe are huge exporters to the UK. That’s Germany, France and Italy.”

The intervention came after stunning revelations by leading international law expert Professor David Collins that the Chequers plan drawn up by controversial civil servant Olly Robbins could be illegal and needs to be ditched.

Mr Hargreaves, who is a co-founder of the City analysts Hargreaves Lansdown, is the latest substantial figures to back a WTO solution.

Earlier this week the Daily Express published evidence from Professor Patrick Minford, an advisor to Margaret Thatcher, that while WTO terms will cost the EU £500 billion it will boost the British economy by £600 billion.

Meanwhile, Michael Burrage, a member of Professor Minford’s Economists for Free Trade Group, published evidence which showed economies trading with the EU on WTO terms do three times beter than EU member states and 50 per cent better than countries with trade deals.

In his intervention, Mr Hargreaves was highly critical of the Whitehall machine which is trying to persuade Theresa May to push for a soft Brexit which would tie Britain to EU rules and turn it into a vassal state.

He said: “There is not one person on our Brexit team that has a clue.

“None of them know the art of the deal. And the amazing thing is they have never ever asked any of the people that really are great businessmen.

“They’ve left it to civil servants and not one of them has done anything of any worth in their lives.”

He also noted that Prime Minister Theresa May was a Remainer and “we should have a team that want Brexit and want us out of the EU”.

He said: “The best option is no deal. No deal would give us free trade with Europe because the three biggest economies in Europe, outside Britain, are huge exporters to the UK.

“That’s Germany, France and Italy. And those three economies would absolutely demand free trade from the EU.

“I guarantee my entire wealth that we would get free trade.”

Leave Means Leave co-chairman Richard Tice, a high profile businessman in London, said that the intervention by a senior City figure supporting a World Trade Deal and no deal with the EU contrasted with the lightweight interventions from the Remainer camp who have been trying to stir up a new Project Fear.

Scare stories over a no deal have included Britain not having sandwiches anymore and diabetics running out of insulin.

Meanwhile, the facts of a no deal with the EU are that Britain gets to keep its £39 billion divorce bill as well as forge a more prosperous future free of EU rules and red tape.

Mr Tice said: “People should trust one of Britain’s most successful entrepreneurs, not Remain civil servants or politicians.”

Meanwhile, in his paper for Lawyers for Britain, Professor Collins claimed that the soft Brexit Chequers plan, which civil servants persuaded Mrs May to accept and has been criticised by Brexiteers, is illegal in international law.

The plan led to Mr Johnson and Mr Davis resigning from the Cabinet and has led to concerns that the UK would be an “EU colony” with a common rulebook with Brussels tying it to rules made by a foreign power.

Professor Collins, who is a Professor of International Economic Law at City Law School, focussed his criticism on a Facilitated Customs Arrangement (FCA) proposal in the Chequers plan

He said that the FCA procedure of collecting EU tariffs risks breaching the National Treatment Principle of the General Agreement on Tariffs and Trade  (GATT) Article III.1 because it “imposes burdensome tracking obligations on imported goods which are not imposed on equivalent domestic products”.

Because the FCA would mean that there would be differing rules depending on the nationality of a product, it breaches WTO law.

Speaking in Edinburgh yesterday, Mrs May defended her Chequers plan.

She said: “We are working to get a good deal.

“We have put forward a proposal that delivers on the Brexit vote that maintains, protects jobs and livelihoods here in the UK that will be good for the all parts of the United Kingdom. That ensures that we have that good trading relationship with the European Union.”