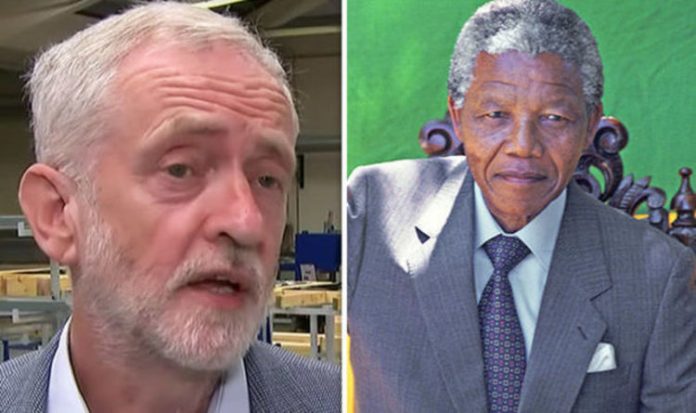 Mr Corbyn was an active member of the City of London Anti-Apartheid Group (CLAAG) during the Eighties, with the group also connected to South African communist and shunned ANC activist David Kitson.

But when he asked to meet the respected leader in London, following his release from prison in 1990 Mr Mandela declined, as CLAGG was considered a rogue, sectarian group connected to communist ideology.

Mr Mandela was told by his African National Congress (ANC) party that CLAGG was not connected to the mainstream Anti-Apartheid Movement (AAM), according to the book Youth Activism and Solidarity: The Non-Stop Picket Against Apartheid, written by academics Gavin Brown and Helen Yaffe.

The much-respected leader said the activist group was “hindering” the campaign against racial segregation in the country and CLAGG failed to receive the backing of Mr Mandela and ANC leaders over the “controversial” demonstration.

AAM insiders have since said supporters of CLAAG prioritised anti-capitalism over anti-apartheid.

Authors Mr Brown and Mrs Yaffe, who were also part of the City Group, wrote: “When it was announced that Mandela would be visiting London in April 1990 (for the first time since his release), several members of the City Group wrote to him requesting that he made time during his visit to meet the people who had maintained a four-year non-stop picket for his release.

“The meeting never happened (and, as far as we know, many of the letters received no acknowledgement or reply).

“These letters were part of a political campaign to gain Mandela’s (retrospective) approval for the Non-Stop Picket in the face of long-standing opposition to it from sections of the London ANC.”

The CLAAG group were known for their demonstrations against the South African state, often boycotting supermarkets which sold South Africa goods.

They also protested against the South African Springboks rugby team’s 1992 tour of Britain.

Mr Corbyn was arrested for his part in the demonstration in 1984, for picketing outside the embassy while a ban was in place, preventing people from demonstrating within 30ft of the building.

The AAM agreed the terms of the demonstration with police, with Corbyn seen to be breaking the rules that the party had worked hard to secure with police.

In the new book, Mr Corbyn admits joining the demonstrators on Christmas Day 1986 with Bob Crossman, the mayor of Islington.

He said: “We went down to Trafalgar Square for the Non-Stop Picket with the Mayor’s chauffeur driving us around.”

A spokesman for Mr Corbyn said: “While members of the Conservative Party were calling for Nelson Mandela to be hanged, Jeremy was campaigning against the racist apartheid regime.”