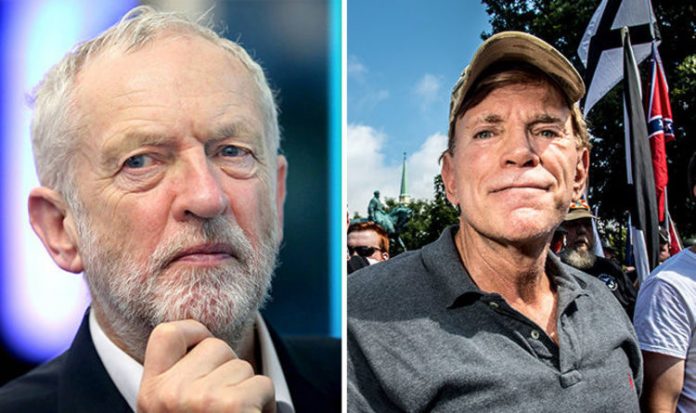 Embattled Jeremy Corbyn faces further controversy today over his failure to act against anti-Semitism after it emerged white supremacist David Duke endorsed his leadership back in 2015.

Duke, who led a branch of the KKK based in Louisiana in the 1970s, told listeners to his radio show in 2015: “It’s a really good kind of evolutionary thing, isn’t it, when people are beginning to recognise Zionist power and ultimately the Jewish establishment power in Britain and in the western world.”

His comments were discovered by the Harry’s Place blog in a promotion for Duke’s show on his website, according to The Times, amid the heated Labour anti-semitism row.

They read: “Corbyn was elected over the weekend despite a massive smear campaign by Britain’s Zio-establishment over his association with anti-Zionist activists.

“Corbyn’s landslide victory in the leadership election can be viewed as a positive sign that understanding of the harm being done to the world by Zionism is spreading.”

Duke’s comments came as he spoke to anti-Israel activist James Thring, who was once at a meeting in parliament organised by Mr Corbyn.

Mr Thring said that although Mr Corbyn did not “mention Jewish power” it was “obviously behind in his mind”.