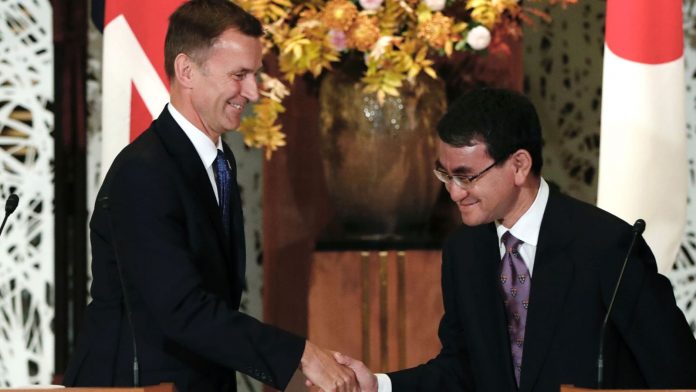 Jeremy Hunt has been praised for becoming the first UK minister to give a speech in Japanese.

The foreign secretary revealed he lived in Japan for a year-and-a-half, praising the wonderful hospitality he received in their native language.

Mr Hunt said he hoped the speech would strengthen the friendship between Britain and Japan “not least because for the first time there is a British foreign secretary who can speak a little Japanese”.

Speaking on Tuesday, he said: “I came to this country for the first time in 1990 to learn Japanese.

“I was introduced to Japan and wonderfully looked after by Japanese families all over the country, and I always try to meet them when I come back.”

He continued: “Today, I am here to take forward the new era of friendship between Britain and Japan.

“We have so much in common as two island nations who strongly support the rules-based international system that has delivered peace and prosperity for many years.

“Our friendship stretches back to the Anglo-Japanese alliance of 1902 – and I am sure it will strengthen in the years ahead.

“Not least because for the first time there is a British foreign secretary who can speak a little Japanese.”

Mr Hunt also poked fun at a gaffe last month where he told Chinese diplomats his wife, who is from China, was Japanese.

He said: “My wife is Japanese – my wife is Chinese. Sorry, that’s a terrible mistake to make.”

Poking fun at the blunder, Mr Hunt wrote on Twitter: “Even if my wife isn’t Japanese, good to meet the Japanese PM – and confirm the excellent partnership between our two countries.”

He was commended by social media users for his delivery in Japanese.

One wrote: “Jeremy Hunt has just soared in my estimation, and his performance ratings are about to go stratospheric. I haven’t felt so proud of a Foreign Secretary since.. well.. for quite some time.”

Another said: “Say what you will about Jeremy Hunt – it’s very good to see a British minister speaking anything other than English, let alone Japanese.”