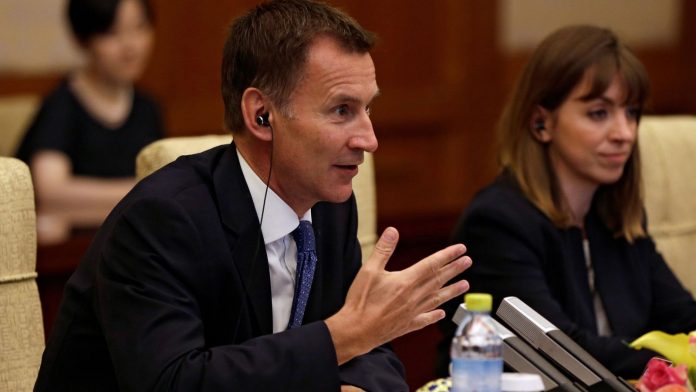 Jeremy Hunt may have replaced Boris Johnson as the UK’s top diplomat, but it seems the sight of a gaffe-prone British foreign secretary isn’t about to disappear any time soon.

Mr Hunt marked the first day of his trip to China – where he hopes to strengthen trade ties ahead of Brexit – by mistakenly telling his hosts his wife is Japanese, rather than Chinese.

The foreign secretary, who moved from his health brief to replace Mr Johnson earlier this month, made the “terrible mistake” while meeting his Chinese counterpart.

Exchanging pleasantries as his UK delegation sat down to talks with Chinese foreign minister Wang Yi and officials, Mr Hunt sought to demonstrate his family ties to China.

But Mr Hunt erred and told his hosts: “My wife is Japanese – my wife is Chinese. Sorry, that’s a terrible mistake to make.”

Following some laughter, he added: “My wife is Chinese and my children are half-Chinese and so we have Chinese grandparents who live in Xian and strong family connections in China.”

As well as risking upsetting his wife, Mr Hunt’s blunder also threatened to offend the Chinese officials sat across the table from him.

Chinese-Japanese relations have been mired in tensions since Japan’s invasion of China before and during the Second World War.

Mr Hunt is married to Lucia Guo and the couple have three children.

Shortly after becoming the longest-serving health secretary since the NHS was created, Mr Hunt moved to the foreign office at the beginning of the month.

During his two-year spell as foreign secretary, Mr Johnson demonstrated his own gaffe-prone streak when he compared New Zealand’s traditional Maori greeting to a headbutt.

He also angered Sikhs during a visit to a temple when he claimed a trade deal with India would boost sales of whisky, seemingly unaware the drinking of alcohol is forbidden under many Sikh teachings.

Mrs May was forced to slap down Mr Johnson when he accused Saudi Arabia of abusing Islam and acting as a puppeteer in proxy wars throughout the Middle East.

On a trip to Myanmar, the senior Tory was caught on camera reciting a colonial poem before being stopped by an ambassador.

And he caused a storm at last year’s Conservative Party conference by claiming a Libyan city could become the “next Dubai” if they “clear the dead bodies away”.