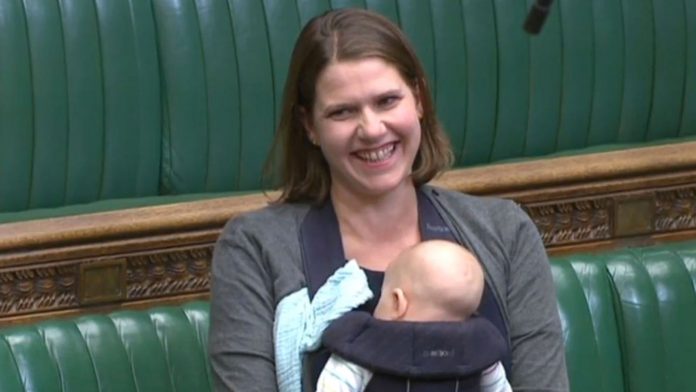 An MP who is the first to take a baby into a Commons debate has said she hopes the move will send a message of support to working mothers.

Jo Swinson, a Liberal Democrat, spoke out about the need to “modernise” parliament after making history with her son Gabriel on Thursday.

“I spoke early on in the debate,” she told BBC Good Morning Scotland.

“The convention is that you come back at the end of the debate to listen to the final speeches.

“By that time I’d had to leave the chamber, I’d had to go and feed my baby and he had then fallen asleep on me in the baby carrier.

“The options were: wake him up and hand him to somebody else for 20 minutes, or go in and sit down, do no harm, and he stayed asleep for most of it.”

We are delighted to welcome Gabriel Peter Kelvin Hames to the world. He arrived, happy and healthy, at 5:53am on Friday, weighing 7lb. Gabriel has two overjoyed parents and one very excited big brother. pic.twitter.com/TsMgxXyObJ

Ms Swinson added: “I think it’s a step forward for modernising parliament and for sending a message that it really needs to be possible for parents to be able to combine their responsibilities for their children with their working lives, and all too often that is made too difficult.

“That won’t always mean taking your child to work, but in the case of very small babies, for people who are working at that stage then that can be just one of the ways in which workplaces can modernise and there could be flexibility in order to make it possible.”

The East Dunbartonshire MP is campaigning for proxy voting in parliament, to allow absent members to nominate another MP to vote on their behalf.

Currently those on maternity leave are “paired” with an MP from the opposing party.

But Ms Swinson’s pair was “broken” in a crunch vote on Brexit, which the government only narrowly survived. Instead of missing the vote to counter the fact Ms Swinson could not attend, her Tory pair voted for the government.

At the time she called it “cheating” and “desperate stuff”.

Conservative Party chair Brandon Lewis responded on Twitter: “I’m sorry Jo. I think it was an honest mistake made by the whips in fast-moving circumstances.

“I know how important the pair is to everyone, especially new parents, and I apologise.”

A vote on whether MPs should adopt the proxy system will take place on Thursday.