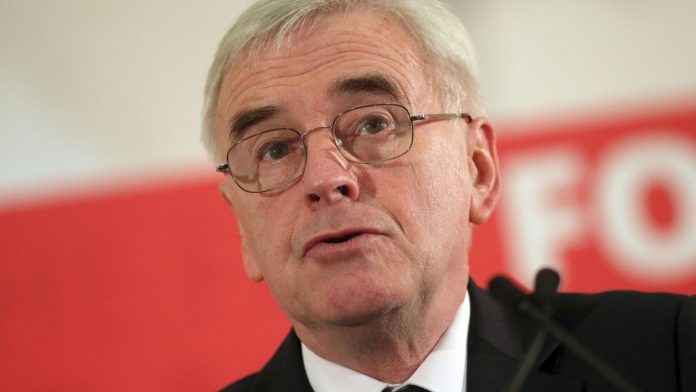 Shadow chancellor John McDonnell has cautioned a second EU referendum could provoke far-right violence on UK streets – but confirmed Labour is not ruling out support for another public vote.

The Labour frontbencher agreed with recent warnings by fellow shadow cabinet member Barry Gardiner, who claimed a new referendum could give “succour to the extreme right” and prompt social unrest.

Highlighting how supporters of ex-English Defence League leader Tommy Robinson clashed with police at recent demonstrations over his imprisonment, Mr McDonnell stressed a need to be “extremely careful”.

He told the BBC: “A number of us now are worried about the rise of the far-right in this country and elsewhere.

“What we mustn’t do is open up any opportunities for the far-right exploiting this issue.

“We’ve already seen violence on our streets from the far-right, when we saw the Tommy Robinson demonstrations and the attacks on the police and others.

“So, Barry’s right to caution how we handle this issue.”

Labour’s leadership is under pressure from a number of MPs and party members to back a referendum on any Brexit deal the government agrees with the EU.

Mr McDonnell insisted it is “not Labour Party policy to have another referendum”, adding: “We respect the past referendum.”

Yet, he repeated a message from shadow Brexit secretary Sir Keir Starmer that Labour support for a referendum on a final Brexit deal should be “on the table”, even if it is not his favoured option.

Mr McDonnell said: “We recognise, when the government comes forward with its proposals – if it does, I’m worried we might be in a ‘no-deal’ situation – parliament will decide the next step.

“So, we’re not taking any options off the table when that debate happens.

“My own view, as I’ve said consistently, the Labour Party’s not opposed to any democratic engagement. I’d prefer a general election.”

On Friday, Liberal Democrat Brexit spokesperson Tom Brake wrote to Sir Keir offering to work with Labour to secure a referendum on a final Brexit deal.

Mr Brake said: “Just last week we had a Labour MP using the spectre of social unrest to dismiss the idea of granting the public a say on the deal, but now there appears to be a change of heart from some at Labour’s top table.

“If that is the case, the Labour Party should come out and say it.

“They should be straight with the public and use their upcoming conference to back a final say on Brexit.

“But will Jeremy Corbyn allow it?”